Why Mr Zelazny, you spoil us 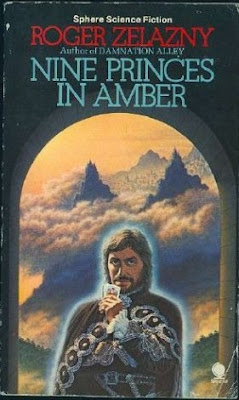 Crewe train station, I am fifteen. I’ve lost my train ticket on the bus and am about to hitch home. Instead the two lads with me whine and whimper and want to wait to see if the nice Northern folk can find my ticket. Later they do, but I’m reading Nine Princes In Amber.
Sandbanks, I am sixteen. I should be at school but I’m not and all that shit is a hundred miles away where here and for a week the house is crowded with long-haired rascals like me. Blue Oyster Cult plays pushy-shovey on the turntable with Pink Floyd, and we are talking about Nine Princes In Amber.
Bromley, our flat the rookery and we are playing games and mostly in this instance because of Nine Princes In Amber.
So it’s first person and starts with an amnesiac. If that is a trite plot device then I choose as it was fresh to me here to hold that with Zelazny it was not. Nine Princes In Amber is a rare book. Really it’s the first fifth of one book and there’re more thereafter even these, but they’re not the same and really even if you’re cuddling up with them you’re thinking about the first story. Solid new wave fantasy, sci-fi, what have you NP is rightly a bit of a cult and nigh on everyone has read it of my own and the former generation of book goblins. Like a lot of good books that I loft into the same era of published-a-decade-thereabouts-before-I-really-read it’s short and that’s no bad thing for its punchy and it’s a mystery and the onion layers go back at about the same time for Corwin as it does for us.
And nowadays there are those that deny they really liked Nine Princes. They’ve moved on to younger loves, more fashionably dressed. And as ever with these book related mutterings I’m not even going to let you peek about the corner to spoil and sniffle at the plot. It’s good, read all five as one, and delight wherein whilst those with such power seem never satisfied without their lust for a throne – then at least they seem to have a jolly good time of it trying.
Posted by Alan at Wednesday, March 16, 2011
Email ThisBlogThis!Share to TwitterShare to FacebookShare to Pinterest