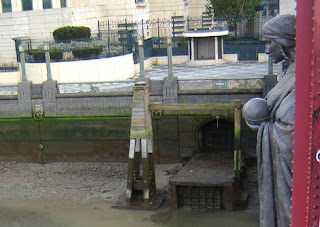 This is my river. Mine, or perhaps I am it’s scruff. London and I might be more correctly the Efrra and I. You won’t have seen it as the Effra is one of London’s hidden rivers and hardly a mightily flowing one when its source in Norwood was still a wood. Now thereabouts one of London’s great cemeteries (Mrs Beeton cooks there), I lived up the hill from the source and there last before leaving London the Effra tracks back my own migration in reverse. Norwood then, Brockwell Park where I spent so many days one summer, Effra Road just off where I lived also and thence to Kennington and Lambeth where many of my ancestors were born, lived and died to exit into the Thames. There the bank below and presumably having crossed by concealed culvert the ever odd headquarters of the SIS since they moved from Century House in Westminster Bridge Road (where we’ve been before). Though hidden since its days as sewer and with the advent I suspect of the railways that made possible the first suburban line. That line made up of Penge, Sydenham (where the Ambrook begins and joins, yes, the Effra) and ultimately to Bromley where Jherek Charnelian and then Maurice Thomas sought Mrs Underwood. All three places again where I’ve lived.
Ultimately I followed the Effra backwards and out of London. From Norwood work took me to Guildford and further yet still. I returned later but Croydon being foul was also never London. I don’t think the Effra holds a grudge. Or if it did then it is too polite to mention it. A couple of years back when coming into the city to meet up with friends I left public transport at West Norwood and walked to Waterloo following back in though not thinking of it at the time my London River. It felt right, which is perhaps why coming into London from the north and Euston never does. The change now is too immediate. The Effra is more gentle where it takes me by the hand and leads me more gradually into Mother London like an old lover, one with whom I share no regrets for the past nor the distance that now divides us.
Posted by Alan at Sunday, March 06, 2011
Email ThisBlogThis!Share to TwitterShare to FacebookShare to Pinterest