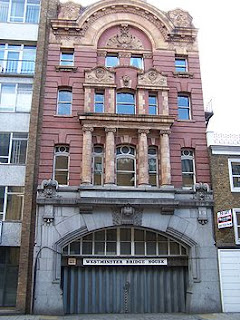 This is one of my favourite bits of the capital’s past, the former London Necropolis Railway. The front can still be seen in Westminster Bridge Road (a place we’ll come back to). Built for specific funeral trains to run from just-close-to Waterloo to Brookwood Cemetery, which had its own platforms. Opened in 1854 trains ran daily until the turn of the century, the growing use of roads slowing the service until in 1941 the station was bombed – and in effect died in that explosion.
Originally the Railway had served as employment for the city’s Nightsoil, those unfortunates previously when found hounded to the river by the mob and derided as ghouls (most famously by Robert Browning in the dramatic monologue Wight’s Progress). Many died when the Railway did, the survivors reverting rather to stereotype until by the 1960s the last of them if Mike Hodge’s 1971 film Camberwell is to be believed were killed by the Richardson gang.
Posted by Alan at Thursday, March 03, 2011
Email ThisBlogThis!Share to TwitterShare to FacebookShare to Pinterest