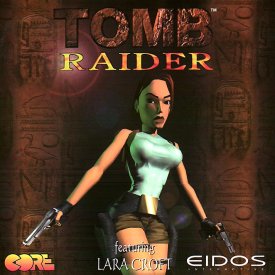 Where’d that bloody T Rex come from?
I came late to the party, not having so much as a pocket calculator in 1996 and certainly not a Playstation. Previous to that some years before it had been the Amiga in Borehamwood with Maurice and I defeating Beholders and even though I’d had a wee spin between then I really wasn’t prepared for how things had changed. And oh how we laugh at the game now, or you might – but I still think there’s something wonderful, something shared about the original Tomb Raider. Those of us who went to the Tomb, it changed us. And you, you weren’t there man. You don’t know.
They rebooted it all a year or three back with Anniversary. It was quite lovely where so much was familiar, yet changed and just like revisiting a town after twenty years away. Like Camberley (which they put they roof on), or Crewe (which was probably just as horrible all along). But I’ve slipped. I scarce touch a console now. My latest a PS2. I’ve got other things to do and the games just don’t appeal*. But there’s always been Tomb Raider and I’ve done ‘em all, but with the next I won’t have the console so I won’t be there to hold her hand. So she’ll die a lot, and you’ll reload twice - and give up.
You just don’t understand Lara like I do.
Step forward, tap back. Run and jump – it’s an expression of your faith, children.
*Apart from Red Dead Redemption. Obviously.
Posted by Alan at Thursday, March 31, 2011
Email ThisBlogThis!Share to TwitterShare to FacebookShare to Pinterest