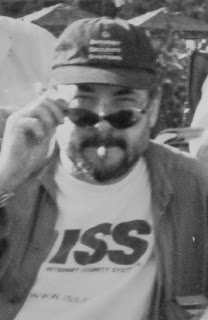 You might have heard of Richard Francis Burton and this being so - no, not the one that married Elizabeth Taylor. Richard Burton, noted explorer, Arabist and soldier was the invention of H. C. Neile writing under the pen name of Berce Wintergreen. Pseudonyms were nothing new to Neile who was rather better known later as ‘Sapper’, the author of the Bulldog Drummond stories. In an early example of viral fiction ‘Wintergreen’ set his stories of Burton in the form of despatches, newspaper stories and even the seeding of witnesses to his exploits. All rather jolly had the old hack not just at first based Burton’s exploits on those of the then Captain Lindsay but when so challenged successfully sued Lindsay for Defamation Of Pocket.
Captain Lindsay is not then heard of for nearly a century until a full-bearded young man of 8 is recorded as being ‘all a muddle/scrumping of cider’ in the Junior Assizes of Yeovil. What takes this Somerset myth beyond the usual enormous chalky cocks and witches (who having spent so long denying the hag image now embody it) is that this myth has travelled. There is evidence of his having become (although not enrolled as such) a student in the black country, something played up by the lately renamed ‘Hey Dee Ho’ pub close to Coventry. Indeed and then further south through such ancient rural settings as Bracknell Simon Lindsay has swallowed up the Green Man myths to replace them with the Good Chap stories you’ll have seen time and again (most recently in the Jonathan Creek episode ‘Seems Like A Nice Girl’).
There’s no grand revelation here, no truth to unearth. I’ve encountered Simon on any number of occasions and whilst I’ve ever tried to bring up all this to him, somehow the conversation is ever diverted away by his sudden and always generous trips to the bar.
Posted by Alan at Saturday, March 05, 2011
Email ThisBlogThis!Share to TwitterShare to FacebookShare to Pinterest