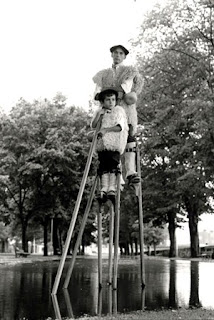 Here in westerly Cumbria it’s the Mary Stilt Day where young and old and many with a military theme parade in the morning on their ‘stick urn stick’ and after a number of similar traditions (all involving heavy, rapid drinking) a round series of afternoon stilt-fighting. The stilts derive from those once used by shepherds to hide from raiding Scots (or to see them coming, local myth would have it both ways but then local myth would also have it that ‘Scots cannot look up’ – a line borrowed and used in Sean Of The Dead).
The coast hereabouts has a tradition of failed invasion – John Paul Jones led the then US navy on an attack upon Maryport and the colliery barges there gathered only to fail to burn them out because firstly they forgot to bring any means to fire them, and secondly most of the raiders – no joke – did not get beyond the first pub). Pertinently the French made an attempt only a little earlier.
To say that England and France were at war should surprise no one as indeed and until relatively recently that seemed to be the default. Though currently the two nations are joined by trade (France gets our middle-classes, and in return Jeremy Clarkson gets more irritated – so win-win all round) the early days of the 19C had yet to see Trafalgar and so there was a French navy, and this navy invaded Cumberland. Or at least a single sloop did whose occupants being foreign were assumed to be from Northumberland and thereby were roundly ignored. The French marched inland until on seeing the distant approach of the stilt and stick supplied shepherds promptly surrendered, and later on realising their mistake took the idea back home.
So, the Mary Stilt Day celebrates that through excessive drinking and a lot of idle, local xenophobia.
Also, Martians.
Posted by Alan at Tuesday, March 15, 2011
Email ThisBlogThis!Share to TwitterShare to FacebookShare to Pinterest