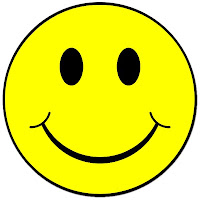 We need more smiley faces. We need them and not as emoticons where like LOL they have become punctuation, but painted on walls and once more proud upon chest and tummy. The smiley face works, or certainly at least it makes me happy. Designed in the form shown in 1964 by Harvey Ball, reputedly in ten minutes flat and for an insurance company it spread like warm butter such that by 1971 there were fifty million smiley faces out there as badges. I was just learning where my penguin biscuit was at pre-school back then (or just ‘school’ as it was) so its impact in the States was as lost on me as Vietnam and Nixon. I also missed out on quite a lot of Led Zeppelin for this and the next few years, but I was pretty sure where my penguin biscuit could be found.
I liked it when a teen though I cannot remember where first, and then as I eased into my twenties the smiley was reborn and wonderfully so in the flaring rave culture. It made me happy to see it. There on baggy t-shirts worn by baggy people without eyes in the sunlight and all bemused as Jarvis Cocker put it, ‘somewhere in a field in Hampshire’.
But I’ve nothing now with a smiley face on it. So if you have an old smiley, don’t keep it terrified in a dark drawer or lost in a wardrobe with (or most likely without) Turkish Delight, take it out and set your smiley free. Like with chickens.
Posted by Alan at Wednesday, March 30, 2011
Email ThisBlogThis!Share to TwitterShare to FacebookShare to Pinterest