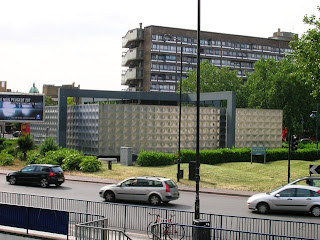 This is probably a blank picture to you because this is the Faraday Monument slap in the obvious middle of the Elephant & Castle, or at least was when last I was there. If you can see it then well done, big isn’t it? Shiny too. Also and again, invisible. Back in the halcyon and hungry days when I lived thereabouts I asked pretty much everyone what the big, metal box was. No one could answer because no one knew to what I referred. I had to point it out once and there was frowning and shrugging and the immediate turning to other subjects. You got around that part of London by prowling a maze of piss-flecked tunnels so most people I suppose never saw it.
It is the Faraday Monument, named and raised to celebrate the area’s famous son. Given that apart from Faraday there is a claim only otherwise to Charlie Chaplin (disputed) and Jim Davidson’s character in a Jim Eldridge (sorry Mr. E) sitcom for local celebrity it was clearly felt that when it opened in 1961 that here was a statement of the Elephants greatness.
Now of course the Elephant is being cleared, modernised and made spanky and new for nice people, to live nicely. They might be moving the huge metal box, so if you leave it too late then don’t blame me if Faraday’s invisible box is rather more effective than you would otherwise have feared. And you want to see it, and if you can call this up on your iWant you might even be able to. Faraday's (mostly stolen) studies into invisibilty are only witnessed now in this way. Back in 1857 science was still able to produce more extensive results from electro-magnetism. The field was an exciting one where still a great deal was discovered and invented in sheds without worrying as to the how of it. As the century turned later scientists were able to prove that the old 'beam or ray' could not possibly work, and they had some maths to prove it. Thereafter of course and it no longer did. So if ever passing go and see the Faraday Monument before one of the last pieces of the old beam-or-ray science is put away for good.
And whilst you're there have a piss in a subway, everyone else has.
Posted by Alan at Saturday, March 05, 2011
Email ThisBlogThis!Share to TwitterShare to FacebookShare to Pinterest