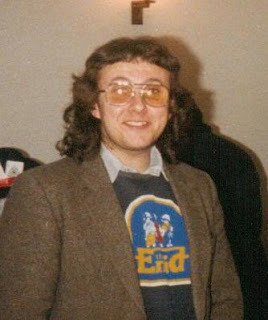 I’ve known a lot of fantastically interesting people over the years and though I’ve lost almost as many I take heart in the fact that having been to so many funerals I bear up better than most. Maurice is probably the best known to you, and just as missed I’m sure. When the rest of us were squandering our pennies on snakebite Maurice would sweep in and see everyone right, for Maurice is the more famous of the two musicians I’ve known.. We first met in Cambridge during the Strawberry Fair when as the (then) reverb zither player for Soft Machine he was unlike his peers rather embarrassed by the wealth being thrown at him. He had missed the last album due to an unfortunate three month stretch in Brixton nick for badly beating Rick Wakeman with his own swan – the judge going hard (as Maurice would always have it) on him since it was reported on by the Daily People.
I was a lot younger than Maurice but being a man of genuine heart he never saw fit to act superior to anyone. Indeed and because we met pissing against the same tree (and in hindsight perhaps the handshake might not have been the best idea), when next I encountered him in the Horticultural Halls in Victoria he kindly remembered me, even though for reasons old I was working and in the garb of an orc, and he as ever was very, very drunk. A state in which I joined him, and indeed as a pack when later over a pizza he stole he admitted he could not recall which hotel he was supposed to be staying at with, as he described it, ‘a Bangle’. This still famous man ended up sleeping on the floor of my flat having toured Bromley demanding the address of Mrs Amelia Underwood and attracting the ire of the local constabulary whom he threatened with chocolate biscuits. He left the next morning having stolen a copy of Hotel New Hampshire and for the next ten years fell in and out of our lives, no less when he put me up for over a year in his crumbling estate in Hertfordshire.
We miss him and his ironic t-shirts a great deal, but raise a glass on this day each year on the anniversary of his and let us be blunt, choking to death on a Winona.
Posted by Alan at Thursday, March 03, 2011
Email ThisBlogThis!Share to TwitterShare to FacebookShare to Pinterest