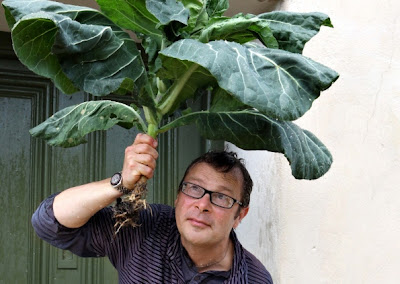 I was somewhat flattered today to find out that in the coming zombie apocalypse I am to get myself down to Devon with ‘whichever is your favourite child’ where I will see out the inevitable fights about the barricades in the River Cottage HQ.

Long preparing for the inevitable, hedge-wizard Hugh Fearnley-Whittingstall has been laying up against the slight possibility of the world not being overtaken by zombies by cultivating Triffids. ‘Zombies by their nature only last so long,’ reads the blurb in the email, ‘but Triffs provide near limitless energy through their cultivated oil, acts a feedstock for cattle, and are the only free range salad that can reliably prosper in the wild’.
Fearnley-Whittingstall with his self-sustaining lifestyle, whole-food organic farm, and guns, has been since long before his rise to celebrity preparing for the worst. As one of the ‘Old Ones’ he has through the centuries been a wielder of the Light against the Dark, the latter which whilst almost always rising has in recent years reinvented itself as the Cool. Six talismans having been cast across the world only by assembling them can the Cool finally be defeated. Given that this will otherwise result in a zombie apocalypse I rather worry that Fearnley-Whittingstall’s recent mail suggests that he has been unsuccessful.
It comes to everyone I suppose. The old ones invite you round for tea, and the cool doesn’t want to know.
Posted by Alan at Thursday, September 06, 2012
Email ThisBlogThis!Share to TwitterShare to FacebookShare to Pinterest