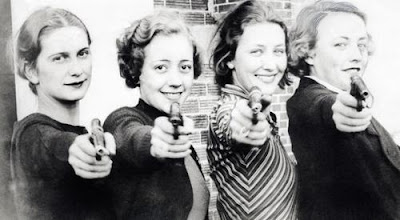 Today is the 70th anniversary of the formal closure of the Cheltenham Militia For Gentlewomen.
Founded some fourteen years previous to that from various other bodies that had previously competed, overlapped and in two cases fought an especially nasty exchange in what was then known as the Battle of the Spa, the CMFG came about when women of good breeding, of good blood, or of a suitably sporting nature put aside their differences under a single extremely well made banner. Comprised of experienced adventurers, two soldiers, a noted Arctic explorer and members of the then recently disbanded militant wing of the Women’s Institute the CMFG courted scandal in an age when women were only, at best, supposed to be the power behind their men. In a spirit of solidarity all women were allowed to advance a petition for membership (save for those considered wet, weedy, tedious, soppy, or given to fits of giggles at the expense of their own gender).
Members were expected to drink wine like a Spaniard, shoot like a German, dance like an Italian, eat like a Frenchy, but most importantly bluster like a Britain. They proudly defended the rights of women to indulge in extremely expensive under things but with a caveat that all such garments were better served cushioning skirts of stout tweed or britches of a corduroy twirl. Their skill at needlepoint and a well baked bun was famously judged in comparison with their accuracy with a service revolver. Whilst certain segments of society mocked them, it is true to say not for very long. A letter from the CMFG weighed heavier than an elephant, and they bagged a few elephants so as to make sure.
When in 1940 Antony Eden called for men to join the then Local Defence Volunteers (soon thereafter to be renamed the Home Guard) the CMFG was amongst the first to step forward. Such was the power of the body that no one really wanted to say no. They absorbed and spread until by 1942 had taken on such numbers that they were amalgamated more formerly as the Women’s Auxiliary Balloon Artillery, members of which continued to serve at the front until 1947 (two years after the formal cessation of war, but only when they were themselves convinced).
The CMFG is little known about nowadays although I hear that in tearooms and certain haberdashers it never entirely went away.
Posted by Alan at Tuesday, September 25, 2012
Email ThisBlogThis!Share to TwitterShare to FacebookShare to Pinterest