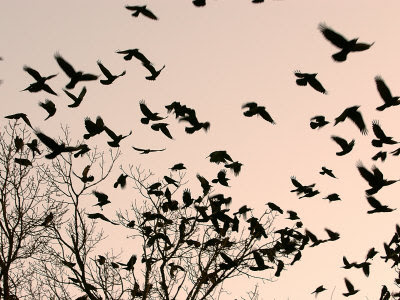 Bloody crows.
They’re not gathering for me but they’ve been poking in through the window, and let’s be frank now crows aren’t ones for passing on a little sauce to their mischief. Without any silver coins to nail to door and windows I’ve had to fall back on common cures. This morning I ground out all the peppercorns in the house between two old iron weights we use on the scales. The iron means nails and the smell of it on the pepper sent their pointy faces to wrinkling - and the letter I nailed nailed upside down to the gate caused the least of them to squabble and hurt their necks.
They’re not stupid; notoriously so. But they’ve not one scrap of wisdom between them. Set them a puzzle, a lock, or a twist of thorn and wire and they’ll solve it in a minute (with fifty seconds of that just looking). But set a padlock on a hasp, on a wall, and they’ll wonder having opened it where the door that never was, went.
I’m a country boy at heart. I was to-and-fro the city half my boyhood since the wettest lump of my family is Lambeth dipped and dripping. And we know these things. We know when you meet a crow on the road that you don’t take gifts, even directions (which are as much the one as the other). We know that the smell of burned hair without fire means that a crow has stepped back into its feathers. We know when they talk it is to learn, because our heads are just another lock. As I say, they’re very good with locks. We know that a crow is always two decades behind in fashion, often more. That they dress smartly, but never well.
They never cook, they never hunt, they thieve by habit and culture but only anything lost, or lost enough (which can mean left on the lawn). It’s been easier since we’ve come along because we domesticate, so we own, so that lambs belong and so can be taken. They hate clocks, proper clocks with cogs – I don’t know why.
And they come to ground before storms.
And they’re loyal to their enemies. Don’t kill crows unless you bury them, and deep. Don’t burn them. Never eat them. And worst of all don’t sell them.
They don’t like pepper. They can’t sneeze and when outside their feathers that’s a real problem because they need to, so they stagger and huff and sniffle and snort and have to go back to the wing.
Bloody crows.
Posted by Alan at Thursday, September 13, 2012
Email ThisBlogThis!Share to TwitterShare to FacebookShare to Pinterest