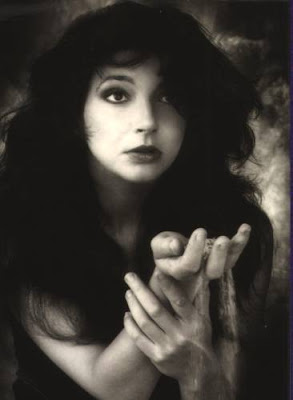 Bloody ha, ha London. Yeah, I know it was you.
Living right out in the country now, the sort of proper rural setting where we don’t tell you ‘not to stray from the road’ because there aren’t any bloody roads, you can imagine our surprise at the events that have probably been nicely covered over by your Olympics. There we were doing the usual rural things; leaning on a gate, wearing smocks, with a cow, whilst the morris dancers capered for beer, milkmaids in bonnets, all murdering hikers. We all had west-country accents. On a hill Kate Bush was calling to Heathcliff. Eating curly kale, with a spoon, made out of a turnip, with shit on us, on a warm day, whilst poets flew here and there buoyed up by their big shirts.
When.
Poor Kate was tumbled down the slope as the bloody hill split only to go and disgorge great lines of townies with smudged faces and caps on! Before we knew it the arseholes were pulling back the primeval grass and dragging off our ancient hedgerows so as to reveal the urban sprawl beneath. If that wasn’t bad enough all these chimneys slowly rose from the ground whilst already-molten iron was swimming about us without so much as an ‘excuse me’.
And the drumming, the constant, bloody drumming.
Before we knew it there was Voldemort, looming around like some colossal puppet.
Which is when all the Mary Poppins turned up.
You’d have thought that would have made the news? But oh no, the bloody Olympics. If it doesn’t happen in London it doesn’t happen at all.
Bloody typical.
Posted by Alan at Tuesday, July 31, 2012
Email ThisBlogThis!Share to TwitterShare to FacebookShare to Pinterest