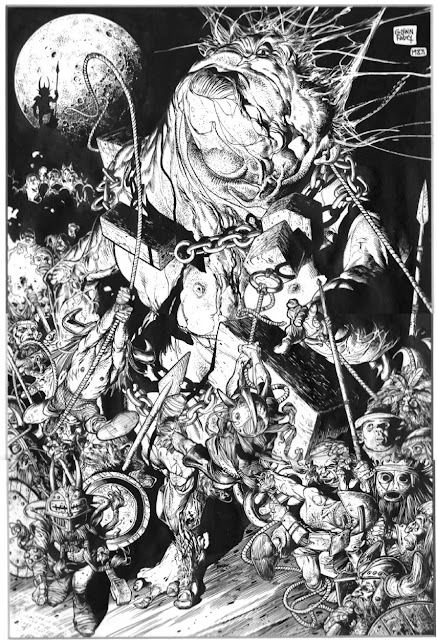 With storms and floods and the grey land running in dark shadowed patches under an angry sky it’s all gone a bit Glenn Fabry. Here in the bitter north the light makes longhouses of barns and the river coils pale and sullen down the valley. Crows were blown by my window yesterday evening, fighting the elements but come morning feasted on the dead and the would—be. It’s a Beowulf landscape, and not oddly animated but primal and sharply defined and therefore as I say, it’s all gone a bit Glenn Fabry.
You’ll perhaps know the work best from comic covers, and most probably Preacher, or Hellblazer. But for me it’s an older time when as a youth scribbling in pencil and picking out in ink in a world where colour was all, and I for that was impaired, Glenn Fabry was there and making Slaine in 2000AD something a lot more than it was before or after. It was fantastical and horrific, it had enough of the real to catch you and plenty of the other world to make you stay. Here was a man than knew his ink, and here was a man then that told me through his pictures that pen and ink is fine, better than fine – light and dark, intricacy and space. This is why I work in pen and ink. Not because I copied but because there it was, just what I saw, and how to show how others might see it too. Worlds that like all the best fantasy are horror.
You don’t need the words. Pieces that are a story all of their own.
And it’s dark, and the wind runs ragged over the mountains of Tolly Maw.
And it’s all gone a bit Glenn Fabry.
And I am not worthy.
Posted by Alan at Wednesday, July 11, 2012
Email ThisBlogThis!Share to TwitterShare to FacebookShare to Pinterest