News Of The World 'Kitten Bagging' 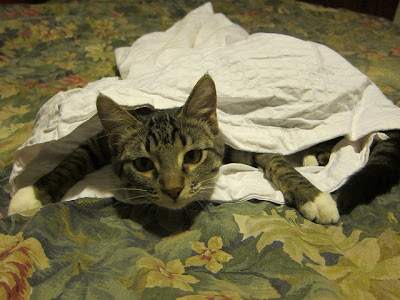 
The Crown Prosecution Service (Britain’s legal body responsible for the decision as to whether a case has sufficient substance to face trial – or something – all I know is that their spokesman is tedious once-children’s favourite Noddy, in a Judge Dredd uniform) has decided that the News of the World does indeed have charges to face in the never-ending kitten-bagging scandal.
As you doubtless know (and how could you have missed it) early evidence that reporters on the former Sunday rag had indulged in kitten-bagging was soon revealed to extend right to the nearly-top. Former senior-executives Andy Brooks and Rebekah Coulson were as rightly outraged as they were surprised that a bunch of hacks (paid to peddle errant nonsense and demonstrate the sort of honour normally only found in men with thin moustaches standing over a railway line when given the task of looking after an heiress) far from nobly taking the bullet in return for their being sacked instead grassed them up. Indeed everyone up, anyone at all, for anything. And this case for the media lovesuck that was kitten-bagging.
For those of you for whom ‘news’ was only ever found in that ‘of the world’ kitten-bagging is the technique whereby a reporter follows a story with the aid of a pillow case containing two kittens and four spanners. The kitten-bag thus made is used to chase children about Great Ormond Street Hospital to the sound of an ice-cream van’s melodic chimes. On Christmas Day. When the Dr. Who special is on. Dressed only in a necklace made from decapitated dollies, Peppa Pig wellies, a flying helmet, and an overlarge Frankie Says t-shirt. Coughing violently whilst demanding to know in a pirate-voice ‘where are the peados’.
Charges are said to relate to allegations of kitten-bagging between October 2000 and August 2006, with the CPS stating that more than six hundred people were victims, some of whom were almost certainly celebrities. To bring charges the CPS must be satisfied that prosecution is in the public interest, and that there is some reasonable expectation of a jury being convinced of the evidence beyond all reasonable doubt. Also whether kitten-bagging is actually a criminal act, and which crime exactly that might be.
Contention rests on the interpretation of instructions foolishly committed to email by the defendants whereby they allegedly told reporters to ‘find out the dirt using kitten-bagging, with the spanners, and Peppa Pig wellies, and don’t forget the pirate voice. We love that bit.’ Rather, that just as might be issued by some creepy villain in a volcano lair the phrase was meant to only convey intent, not process.
Already the RSPCS has come out to forcefully demand that the law is changed to protect spanners from needless scratching at the paws of tiny kittens; however briefly.
Posted by Alan at Tuesday, July 24, 2012
Email ThisBlogThis!Share to TwitterShare to FacebookShare to Pinterest