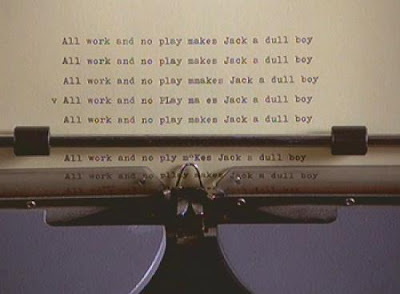 Alf found my old typewriter this lunchtime.
He’d been digging about amongst the boxes, clutter and cobwebs that hide in terrified corners of my little house hoping for a rope-lighter and some plum jam he swore he’d put away for better days (and presumably for the next time he happened to find me livinh somewhere near Ypres). Alf found it very funny, because Alf is always very modern; albeit very modern in 1976. At best.
The stained little Olivetti portable still had the same ribbon so many times wound back and with me grabbing no more than a heel of bread and a pot of worried humus for lunch he tried to read back what had been written on it all those years ago. I learned to type on my dad’s big old typewriter and later a little Olivetti. I typed because thirty years ago there were fanzines and postal games, and turn reports to write – and how little then things have changed. The original laptop whose keys I’d pound, and probably because of which the keyboard I use now infuriates my family because almost all the keys are blank from constant use. Back then we’d sort of have the internet – letter columns in fanzines so a reply to a discussion would come every few months and the simple things we take for granted now, formatting and stuff-looking-nice would have been high science-fiction indeed. The very idea of this, this blog for example, would have been thought something that might be around with hover cars and skin-suits. Hell, they didn’t have anything like this in Logan’s Run or The Stainless Steel Rat so it would have been pretty alien technology at best.
But we forget how long ago that was. Thirty years. Thirty years before that and rock and roll was a devilish new invention. Thirty years ago when typing was something girls did in school (when girls learned how to be secretaries), and we sent things by post. But my, that was exciting! I used to bundle back from school at lunchtime to see if my turn report had turned up. Or if Jerry and others had written to plot and gossip, or to arrange meeting up – and which we still do to this day. Just more quickly, but somehow with more faff. The post was exciting. And of course it’s better now, obviously, but in some ways it’s a little too easy?
I learned to type on a manual typewriter and all my bad habits come from that.
And it’s a right bugger scraping the Tippex off my monitor every night.
Posted by Alan at Wednesday, July 18, 2012
Email ThisBlogThis!Share to TwitterShare to FacebookShare to Pinterest