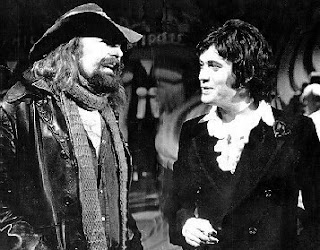 The 1973 film of Michael Moorcock’s novel of the same name, The Final Programme did not find favour with the author. Few authors do, I suspect. To see your story stamped to bits and remade by another at least it shares enough with the original that fans are able to enjoy what is, after all, the only time we’re ever likely to see Jerry Cornelius on the screen big or small. Moorcock does praise many of the actors who improvised and made the best of it, and because of them then this is a film that’s always going to make me smile.
I first saw it late one Sunday night as a youth, in black and white and on whatever used to show left field films before Moviedrome. I did not see it again until a couple of years back at a friend’s house, and then shortly thereafter for the third time at the BFI where Moorcock the great man himself sat across the aisle from us before standing up at the end to sat once again say how he really didn’t like it at all. That made it no less special. Nor less that (myself at the time heavily bearded and bent upon a walking stick) his good lady wife shooed away the masses so that I could exchange a few words and a photo. Michael Moorcock’s big by the way. His great paw could fell any number of upstart young authors with one swipe.
Perhaps because I’ve seen it the film less times than I’ve read the book it remains special for me. I choose to see it as the same characters with rather loosely, almost, the same, sort of, not really at all, plot. In keeping with the milieu another version crossed across the multiverse, just as the original is the hipper, more ravishing telling of the early Elric myth. There are giant plastic bubbles with Hawkwind in the background. There are psychotropic defences on mysterious family piles. Great rolling automobiles come with cup holders and whisky. Miss Brunner is more delicious than villainous, and Jon Finch is a very good Jerry indeed. Admittedly why in the film where the Final Programme itself is a self-replicating perfect being it is represented by a crippled ape I don’t think anyone is entirely sure. But it’s the 1960s as we really would like it to have been. Where heroes if you have to have them, are as anti as they are reluctant. And where climactic fights go terribly awry with the hero scrambling away from an angry Greek, and with shouts of ‘Miss Brunner, I’m losing!’
And it allows the shot above where on set Moorcock and Cornelius are sharing words. So all in all it was still a very tasty world indeed.
Posted by Alan at Monday, June 25, 2012
Email ThisBlogThis!Share to TwitterShare to FacebookShare to Pinterest