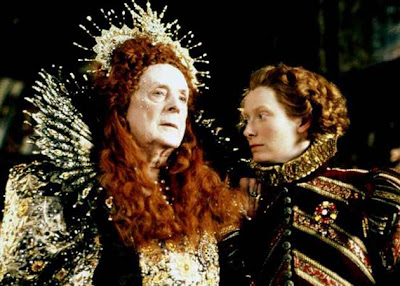 I hear, your majesty, that there is cross-dressing afoot...


Across England now and for four days the country is celebrating the latest jubilee of the Queen. Even ardent republicans (for the benefit of you all overseas, in England a ‘republican’ is a fellow that runs the local public house – or pub) are showing their opposition to the establishment of monarchy by taking a few days off work. Here in Tolly Maw though we’ve none of that. Not just because by ancient charter we’re actually a part of the Duchy of Burgundy – ceded by Edward VI after the Battle of Nancy to Charles the Rash – so much as people hereabouts had other stuff planned for this long weekend. So we did it all last week. The sprouts had their red-white-and-blue day at school. There was bunting, and there was Gloriana.
I remember the Silver Jubilee. I was nine years old and dressed in a bed sheet marked with an orange cross dressed as a crusader. I had a tinfoil helmet, aptly. There were street parties, huge celebrations in school, and I got a mug, and a fifty-pence piece. Being nine I rather missed out on all the punk that everyone else in hindsight claims they were all into at the time – rather than, for example, the disco that was actually the theme. Of course no more kids were punks at the time than they were crusties and greebos in the early nineties. And even fewer were hippies in the sixties, where the kids still wore suits and the UKs contribution to Vietnam was the music.
But here and last week it was the celebration of the reign of Queen Elizabeth. Albeit Queen Elizabeth the first. Gloriana to her celebrants, big nose to her enemies. A few wore ruffs, everyone else baggy shorts tied at the knee, and we had at least a half dozen Gloriana traipsing about helping themselves to people’s bedchambers (where their hair and teeth fell out due to lead poisoning from the make up).
In a way it’s rather apt. Benjamin Britten’s opera Gloriana was first presented during the celebrations of the current Queen’s coronation. It’s part of the myth created about the heirless Elizabeth Tudor. The virgin queen, the faerie queen Gloriana, that filled much of the hole left by that other virgin with the dissolving of the English Catholic church. Sir Edmund Spenser’s poem The Faerie Queene was set to flatter the then-monarch, and as a Tudor monarch you bloody needed to heap on all the flattery you could. A time of absolute monarchy where Queen Bess at least had the wits and cunning to play it cleverly; whereas the Stuarts that followed did not. Of course this all ignored that to be a Faerie Queene was to be the top of the bastard pile. Woodlands full of malingering rapists, where unicorns were pot-bellied goats who only laid their horns in the laps of virgins. So, y’know, it was a unicorn – not Big Tom the miller’s-son with his giant hands then?
So here it was Gloriana, and because of that the twelve surviving Tilda Swinton (who flitting about with bright eyes burning with a hunger for our souls - also, Jaffa Cakes) cruised from one to the other like young David Bowies, androgynous and eerie.
But there’s no mug, which is a shame.
Because you can never have too many mugs, socks, or pens.
Posted by Alan at Sunday, June 03, 2012
Email ThisBlogThis!Share to TwitterShare to FacebookShare to Pinterest