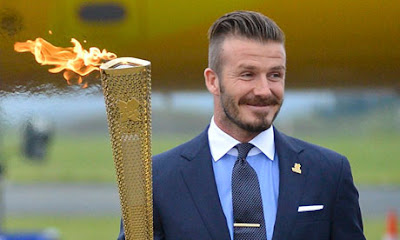 
David Beckham is said to be upset by news that he has not been picked for the Olympic squad. Beckham (currently playing in the Congo Outdoor Ice Hockey League) has served his country admirably both during the Olympic bid itself and the subsequent need to beat rationing in order to stage the games at all. ‘I even look a bit like a spiv now,’ the former captain of England announced in industry mag Hello, before rolling up his sleeve to reveal a dozen moody Rolexes, ‘Want one?’.
It is said that if you cut Beckham in half it would describe service to country through his middle, albeit spelled badly (but with three exclamation marks). Way back in the early days of the last war he served for the first two series in the Walmington-on-Sea Home Guard, dividing his time between there and Portobello Lane (where he would scare children possessed of a magical bed knob). Later more commonly associated with barrel-organs whilst walking across the lawns of St. Trinian’s without Beckham’s efforts in recent months the British Olympic effort would have been sorely lacking in nylons and petrol coupons. Alas a professional athlete, Beckham does not qualify where originally the amateur status of Olympians was put in place to prevent gentlemen having to compete in tests of strength with the likes of blacksmiths and labourers.
‘I just want to serve me country,” said Beckham. ‘And shift this ‘alf undred gallons of red petrol what fell out’ve a lorry.’
Posted by Alan at Thursday, June 28, 2012
Email ThisBlogThis!Share to TwitterShare to FacebookShare to Pinterest