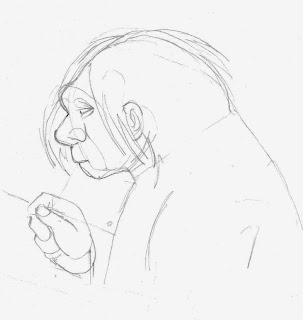 A family of Neanderthal have moved in across the river, but I shouldn’t really call them that because they don’t come from a German valley. The Stigs seem very nice, Q’s spoken with the wife Mrs Stig who’s into mocking our attempts at computers whilst Mr Stig whilst it could be said works in the dump, he also owns it. It’s lucky they’re friendly since whilst racist stereotypes have them as being short, 5’5” or so that was twenty odd thousand years ago. We were averaging that at Waterloo. They’re bigger at the shoulders too, stronger, with those big old hands and much as we like to think otherwise they’ve got bigger brains. Mr Stig suffers for this arthritis and about our age they’re martyrs for their backs and knees but what struck me the most isn’t that they look, forgive me, somewhat lumpen so much as we look like children. Our features as adults are still those, in comparison, as our kids.
Now I’m not going to join the parade that feels guilty about my ancestors. Mine were mostly in music-hall. So sorry for ‘Woops Mr Porter’ but you’d have to go a lot further back to find where we might herald our triumph in a post-ice-age, or the competiveness for territory, our roaming blah blah blah. Shit has happened and Mrs Stig loathes people apologising when she would far rather laugh at us – not us, but just as sweeping – turning to crystals rather than medicine, looking at auras and reading the future in cards. She thinks it funny that Ming The Merciless is our shaman. But she does take the Daily Mail with her New To You Scientist, and you don’t want to get started on immigration. We’re from Africa after all. So we’ll be polite and with luck, friends.
They aren’t all Robbie Williams.

Posted by Alan at Wednesday, February 22, 2012
Email ThisBlogThis!Share to TwitterShare to FacebookShare to Pinterest