It May Bring Rain 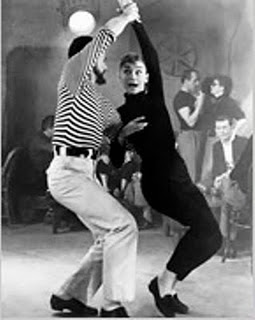 Because we all knew that the limits were 1955 to 1989 that was where we stayed. It’s why we never go there now, too many tourists.
Simon’s dancing with Audrey Hepburn and all hail to the king, baby – Moz has got bongos.
I say with suspicion, “It’s not jazz is it?”
Jerry thinks this is very funny. He snortles around a carafe of very rough red that he’s still getting looks about. For a beatnik bar they’re very strict on age and Jerry’s not helping things with his Tintin quiff and Bakelite glasses. There’s an oath when a pigeon shits on Rob’s suede. He can’t believe it for a moment. He just stares, which is when the pigeon punctuates the pause with a full stop that plops into his glass. Jerry says nothing but doesn’t help by taking off his glasses for a good clean they do not need.
“Right,” says Rob.
We’ve come here for a quiet evening in a quiet year. Simon’s choice, the date for his date though he’ll deny it later. I still think this Beatnik crap is jazz. Moz picks up on the tempo because Moz can smell trouble, normally because he’s the mass that makes the gravity to pull it in. He’d interfere if only to save the wine but he’s got this massive leg on him right now and whilst he can run it’s only in circles. Simon hasn’t noticed or doesn’t care. If it was Paris then it would be all lowered brows and tutting, telling clicks of the tongue, but he’s on with Hepburn and an adventure won’t hurt him there one bit. In an hour there’ll be a speed boat, or a train or something thrilling with a motorcycle combination. So Jerry conveniently cannot see, Simon’s up for the adventure and Moz as I say has this massive leg on him at the moment.
What Rob has is a gun that takes the time of two guns to draw. It’s something like a Blackhawk, or a Redhawk, or a Magnum, or all three because when Rob practises against cans he can’t see the point in picking them up again for another go. It’s not like he’d do the same with people. It’s about a foot long and with his arms that means he’s only got two more to reach the pigeon.
“Rob,” I say.
Jerry takes a hasty phone call on a book of matches.
“The fucker,” says Rob, “will rue the day...”
And I’ll be down one pigeon but hey, I’ve got a lot of pigeons.
Posted by Alan at Wednesday, November 09, 2011
Email ThisBlogThis!Share to TwitterShare to FacebookShare to Pinterest