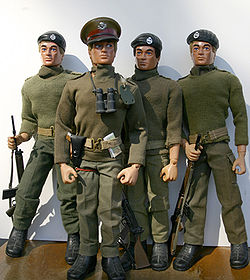 Action Man UNIT (not pictured, dead talking beavers)
The  success of the film GI Joe: The Rise of Cobra has given rise we learned today to a British version, Action Man. Jason Statham is set to play the eponymous hero who without the benefit of futuristic weapons or nanobots is said to be more faithful to the original toy line that boys born in the 60s and 70s will remember only too well.
Statham (Action Man) is first recruited in the Bracknell Greenshield Stamp shop where despite all his friends being tank commanders and deep-sea divers is a lowly mountaineer, with a beard, but thankfully not a sailor. An early montage shows Statham (Action Man) landing on his head after his parachute never opens, losing a foot in a wonky boot, and finally annoying his grandparents no end when his first uniform and proper gun is that of a German Stormtrooper. Wearing the tracks from his scorpion tank as bullet bandoliers and flying off shallow hills in an indestructible armoured-car Statham (Action Man) is crippled by the end of the second act when his gripping hands perish to the point where he loses two thirds of his fingers.
Only when at his lowest ebb is Statham (Action Man) revived by the realisation that he has collected enough Action Man Star Tokens to gain the amazing kitbag. Also and because choice is limited, his new uniform. Neatly dressed in the red of a Canadian Mountie Statham (Action Man) is later mortally wounded by a giant dog before and not to spoil the ending, there is an air pistol.
More at the addy here but be warned, if of a certain age you might be there a while...
http://www.actionmanhq.co.uk/pages/papers.html 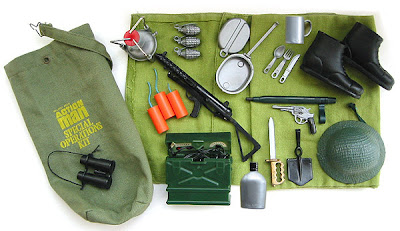