Starch, and the Jelly People 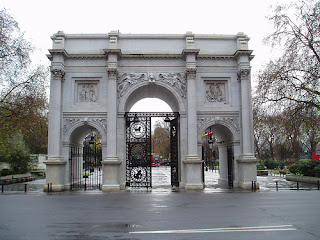 Hmm, sugary...
Marble Arch was originally built as the front of Buckingham Palace and whilst I know it was only moved round the back – still it was moved round the back. Outside the grounds and long serving now as a traffic island under which only the Queen, the Royal Horse Artillery and the late Frank Muir are by tradition able to pass it was... look, it was moved. That’s enough isn’t it? Bloody great lump hitched up on bricks and taken I hope in a single night with the presumed aid of dozens of gaily striped passenger-balloons. It has rooms, it used to be a Police station and it was once described as resembling a ‘giant sugar erection’ which must have made someone jolly happy come Christmas morning.
But none of that is the strangest thing about it.
Because and I can’t believe no one told me, but when I went by there in the early hours last this was the statue that now accompanies it. 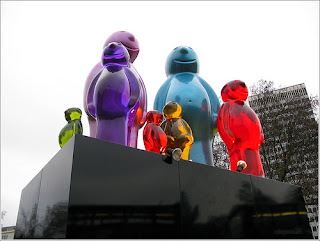 There’s doubtless a very good story behind them but you know what? I don’t want to know. Some things are best just are, and these just... are.
Posted by Alan at Wednesday, November 09, 2011
Email ThisBlogThis!Share to TwitterShare to FacebookShare to Pinterest