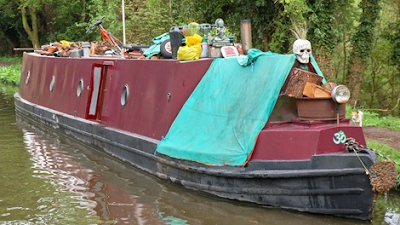 ‘I remember they took my bike,’ said Beano.
‘Stole it?’ Den tried to imagine why vagabonds would want a boys bicycle.
‘Not them, the council. They came round in this big flatbed, collecting for the king. I lost my bike and my Nan lost her bed frame. They took my da’s tools. He was annoyed about that as they were his Da’s, some older too but they were for the Effort as well. My da wanted to know what bloody use a garden trowel was unless they were worried about fascist weeds in the garden. No wonder there was a bloody revolution. Taxes to fight the reds in Russia, and raffles and dances to raise money for the Bolshies every second Saturday.’
‘You had fascists?’
‘For a bit. My nan and da only found out about it after we were no longer part of this new state. The Council too I reckon. Mr Poplar up Papcastle way, he was a fascist. He captured the village up there, let go with his shotgun too until he fell asleep. We had an anarchist too, but he fell off the bridge.’
They were days into the journey, tied up now on the canal a half mile from Berkhamsted. Beano, who had been a middling drunk on every previous night, was a determined one now, scorning the pub in preference to a bottle of Hogarth’s. Beano had been stationed here for a bit back when the town had been an island for the baby Prince Edward in the name of the assassinated King Rupert. He told Den how he should have been home back then. But home had only been smuggled letters. But his da had been in the Loamshires. So then had he, and all over the county they had been sent as if no one had known what to do with them. Until the gas and the savagery of one afternoon in Salisbury and a fight for a hill fort whose builders had been thousands of years dead. There had been hundreds younger, fresher and probably with less idea of the why of it than those considerably more ancient ghosts.
‘Bloody kings, bloody parliament, and bloody governments. Bloody reds, bloody republicans, bloody communards! Murderers the bloody lot of them,’ said Beano. ‘This bloody place was where that devil William the Bastard got as far back in ten sixty wotsit. It was on that comic.'
‘The Hotspur, the Beano?’
‘No, that long carpet, that tapestry they’ve got in Reading. Saw it when we were based there for a bit. French, when the French conquered England. They got this far and you cockneys got your guts kicked in, circled you, here, Berk-bloody-hampsted.’
Den (though he played it down) had once, and it seemed a very long time ago, been the toast of his grammar school and assured of a place at the State University College of London. He said, ‘William the Conqueror beat Haruld at the Battle of Hastings. He came here?’
‘So we were told. king’s men ourselves weren’t we? Here was where he stopped at first. It was later he came to Cumberland and killed bloody everyone there. My nan wouldn’t have anyone called William in the house and still celebrates that continental Ligny Day; lots her age do. I wouldn’t be French round Cockermouth for no amount of money. All the bloody-minded anger of anywhere thereabouts. But in Cockermouth we’re funny folk, what with reading books and stuff. You see all this? All this education and milk kids get now? Their trousers ain’t got no bums, but they can write a letter of complaint? That’s been Cockermouth for ages,’ said Beano. He drank more gin. ‘We had elephants once. Right down the high street. You got a letter?’
Den started. He nodded. He lied, ‘I’ve got a job on down Bournemouth way after this.’
‘Gah, we get into Limehouse and paid off there’ll be lorries going down that way. You’ll get a lift, easy.’
Good thought Den, because if Fred’s letter had been brief it had said enough that whatever was behind Den’s disgrace it was in Bournemouth. Or at least at an address in Sandbanks, which Den had never heard of but had to presume was close.  But now and drinking he the son of the last king’s executioner and a militia brat in the 60s swapped war stories with a Loamshire loyalist sergeant from the civil war of the 50s. This was the country he thought, right here on this barge, sharing the gin that cures all ills; the gin with the foil top so you couldn’t even put it by for tomorrow.
Bottoms up, England.
Posted by Alan at Thursday, December 06, 2012
Email ThisBlogThis!Share to TwitterShare to FacebookShare to Pinterest