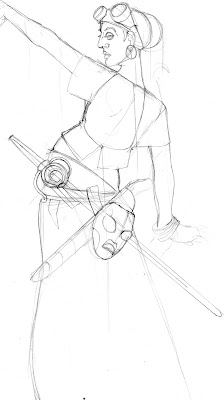 Like anything of value to him he had lost all hope at sea. His rescue owed nothing to it, it was either fate or a curse that saw him here now; and there was no such thing as fate. It might have been better had the sea taken him too. Or perhaps it had for there was something of the sea story about the den. Dick knew it was 1860, though here it was the year tree scented ducks.
“Frog,” said his benefactor, Truly.
“Frog?”
“They make most things, do the frogs,” she said. Her accent was the sort of soup that never ran out as each day whatever was to be had was added with more water to the pot. Something Spanish, something of the French, and even a little Dutch (though they spoke in English). Each word smoothed into the next, all the rough edges worn down by so much use and none of the languages her first. “Including time, and certainly the years,” it was an accent that crossed the world and one not unfamiliar to Dick. He had heard it in ports, aboard ship, anywhere that travellers gathered and crossed. And yet quite to the contrary everything he had seen so far suggested quite the opposite. This city, this island, this ‘Parquet’ as it was called kept its people jealously. There had been much here before, but there had been a Parquet for just a little more than three hundred years he had learned. The years descended from then. Trois cent un deux as they called it in the grander quarter Truly had named the Rules. Here in the Delves that made it tree scented ducks. Words were stale bread; they took the shape of the mouth the more they were chewed.
Dick found by a fishing smack had been brought to Parquet. It’s old harbour overhung by the green rock upon which whose palaces and grandeur he had seen no closer once tossed to the quay with the lobsters. Here, and there was no sunlight. These were the Delves and they stank. And the Delves he had heard were by no means the worst places to be. Truly picking at the catch had picked at Dick. They drank a sour spirit from tiny cups. It tasted of burned paper. She had paid for the bottle with three wooden coins, well milled and thick varnished. The varnish had gone green. The spirit was foul and the light from the fish oil lanterns with their cracked glass cast fractures across the den.
There were only another two like Truly that Dick could see here. Their coats a better cut than the rogues that otherwise crowded, sang, boasted and sneered at one another (though the cut and the cloth made for someone else and shiny at breast and elbow). Those rogues stood apart from Truly not only for the poorer quality of their stained garments, the attempts at bow and frippery that Truly did not concern herself with, but because each and every one of them was armed.
“They think of their selves as pirates?” said Dick quietly.
“Picaroons,” Truly said the word with a flourish of her hand. “And once, si, they were pirates. Or not they, but they that were first such a thing. Above and our laws might change daily, but certain tradicion may not change. Picaroons were a part of what made our Parquet. These are those that have chosen that life. They may have either the long wand,” she mimed one of the each-unique guns that most wore at belt or in sash, “and the short bodkin,” this to the sword all possessed and again rarely with two alike. “Or the short wand and the long bodkin. Also you will note the hat? Their hats are very important to them. What wealth they have goes upon their arms, their hats, and the importance of living an outwardly very fine life. They are consequently almost always extremely poor. They might not eat for a day, but they should be seen to drink very well. You should not offer them offence, though not being of their kind they would mostly ignore you. You could not defend yourself and the price of a wound handed down by the Jug would be beyond most of their means.”
He tried not to stare at them. Men and women, all shirts and britches, bows and sash, ribbons and ornamentation, and of course the very fine hats that could serve no better purpose other than to simply be that. Dick said, “There is war?”
“There is work for one that would fight, si,” admitted Truly. “And work is what we should put you to. You must eat. You must have the wherewithal to at least take a rope for the night upon which to lean. You are a sailor?”
“A whaler!” Dick corrected, the distinction was important to him.
“There is no sailing here.”
“But the smack that brought me here?”
“Is owned by those that saved you, and sold you,” she added, “to me. And you must work. If you fall away then you shall be made to work, and for no purse, and that is a trap that once fallen into whose sides are very steep.” Dick thought on that. He made to answer only for Truly to forestall what he had to say with a raised hand. “No,” she said. “Whatever skills you might believe you possess are in the hands of others, of the Ordre. You must, my friend, start at the very most bottom. And what flows there, and from there?”
“I work for you?”
“Si, indeed you already do. You look strong enough, so tell me – have you ever shovelled shit?”
Posted by Alan at Sunday, December 16, 2012
Email ThisBlogThis!Share to TwitterShare to FacebookShare to Pinterest