The First Taste Of Christmas 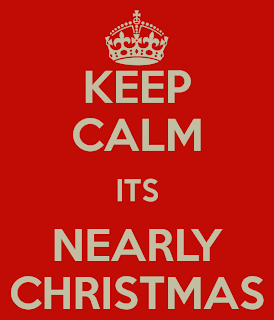 'It's nearly Christmas. It is.'
I can taste Christmas now; goose, and cinnamon, pine sap, and a little whiff from where I’ll no doubt hide the bumper box of smelly things from Lush.
That last for Q in case anyone was wondering? It’s a week until the letter to Santa has to be written, but some things (like fate) are inexorable. That first soft flavour came this week from the harvest festival in our local school where the sprouts in keeping with local tradition had to beat the bounds to keep the fields free from faeries. Bosswell the youngest being both brave, bold and a magnificent hunter had three in a rusted bird cage before Catnip, my eldest, freed them with shrieks and scolding and a well-wielded wooden spoon she took from the shed (and marked still with runes as a reminder of its purpose as a present from our last expedition). So the girls sang at the school and the wee one won (da-doo-ron-ron) the weekly prize, which I don’t normally see. She’d done well at classes, but also at learning her spells, and indeed as said for catching the faeries.
So then soon and in rapidity it’s all hallows eve, then fireworks and then the swiftly-passing weeks before that most splendid of seasons. Q’s shifts mean that after the coming half-term I’ll have full days to work – albeit starting after the kid’s are in school, which is half the day gone and into the evening instead. So there’ll be much tappiting to do for work (praise Cope with... well... I might have mentioned Christmas?), and the blog, and a half hour squeeze for more writing, and an hour a day somehow with an instrument, music being this year’s evening class. Crowded, crammed, but that’s how it should be so that come Christmas it’s all the better. And then when I end for the year the traditional novella leading to the day itself to do, and planned, and looked forward to.
For Christmas is three days, and I love them all. Others do not, and many have forgotten how, but since Christmas was pretty crap when I was young it’s dashingly smart now old. With the eve all excitement and games, with songs, and cider, ending when all else are asleep for a rare trip alone to Church for the midnight visit. Then come morning for the day all bright and bouncy, with parcels and paper and then a whole morning with me cooking the festive feast. Then the last of the three where presents are inspected more closely, and when the table groans with the all-day help-yourself of pies, and cold cuts, of many cheeses and pickles and a little rum come dark. Because it’ll be the midwinter, and whilst the wind batters the roof and the light runs nervously by it’s right and proper to sing and raise cheer, to play games and feast.
Because Christmas comes but once a year, all three days of it, and I can taste it now; goose, and cinnamon.

Posted by Alan at Sunday, October 21, 2012
Email ThisBlogThis!Share to TwitterShare to FacebookShare to Pinterest