The Battle of Hastings 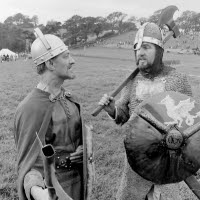 No you tool, there's no such place as 'Vikania'


So.
A bunch of Germans first had a battle against some Danes (who had arrived there years before after going on a bit of a Viking) in Durham and who were all pretty much of the same nationality as the Germans. Quickly then the Germans went to Yorkshire where they had another battle this time against some Norwegians, some Swedes and a few Danes all of whom were very much on a bit of a Viking. The Germans won that one too but had to hurry all the way down to Pevensey, near to Hastings (which hadn’t yet developed miles and miles of crumbling arcades) because two battles wasn’t enough.
They got there in time looking for the hat trick because some French, who were really Norwegians (because they had been all for the Viking bit too) had landed there with some Germans who also were a bit French, and some Britains who had left Britain some time before because of all the people that looked quite a lot like the sort who would really enjoy a good Viking. There were Italians too amongst others, but they weren’t at all Viking, other than those that soon would be once the French (who were really Norwegian) thought they’d go somewhere a bit warmer for the Viking season. The rest of the Britains were Welsh, a lot of them being Cumbrian which was also Scottish, but also Cornish which wasn’t. But the British didn’t really get involved as they’d been so firmly kicked in the nuts by all the Germans and the Scandinavians some time before that they weren’t British any more, but Welsh as I say, which sort of mean ‘foreign’, a word coined by the Germans for the people they found in Britain. Which was by now England, named for the Angles, who were Germans.
And in this the third of the battles the French won, though they weren’t really French (who were Franks) but Norwegians who done the Viking bit and got into the smart haircuts and chainmail shorts.
And that was the Battle of Hastings. Though it took place at Battle, which wasn’t called that till afterwards, otherwise it would have been a bit of a giveaway.
Posted by Alan at Wednesday, October 03, 2012
Email ThisBlogThis!Share to TwitterShare to FacebookShare to Pinterest