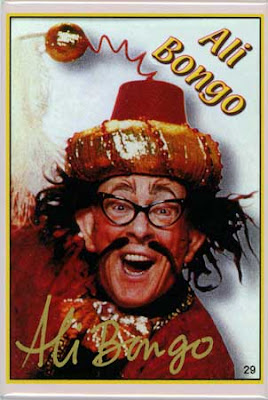 David Blaine keeps on stealing my batteries.
I’ve spent the weekend trying not to notice him. He was there on Friday standing at the end of the garden, and every hour that went by he would move a yard forward whenever I wasn’t looking. He’s all mysterious like that. Come Saturday morning and he slipped through the front door on the third go after knocking and running until I gave in. For the next couple of days he lurked, never making eye-contact, mumbling like a teenager, and making toast.
So, so much toast.
He’s been leaving magical messages for me so I know what he’s doing. I know what he’s doing without the mysteriously appearing soapy marks on the mirror whenever someone in the house takes a shower - he’s stealing all my batteries. The ones in the remote were first so we’ve been stuck on CBeebies. He stood with a lampshade on his head all afternoon until we got so bored pretending he wasn’t there that we began to think he wasn’t. He’s had them out of the camera and thought he’d hit riches when he found the kid’s room, but expecting plastic crap that makes noises he spent an hour trying to take the back off wooden blocks and badly shaped zoo animals. He sulked all evening afterwards. I only know that because of another eerie message that appeared inside a pre-slit orange.
David Blaine sulking is exactly like David Blaine not sulking, just with the slightly stronger whiff of Nik-Naks.
David Blaine is stealing all my batteries because like every David Blaine stunt his current David Blaine stunt it to do something that other magicians have done, just taking longer, so much longer, that no one know if he’s still doing it because no one wants to look any longer; just in case he is. He needs batteries because he’s playing with Tesla coils.
Like in The Prestige.
Or so I asked. I’ve not seen the film; only read the book. In the book two magicians battle and hate one another down the years until one beats the other by using a teleport machine made by Tesla to teleport around. The downside being that it’s actually a duplicator.
David Blaine says he’s never heard of the Prestige. I say he’d like it; just not a lot. He’s suing me for using his catchphrase. At least I think that’s what he said - mostly what I heard was mumble-mumble-mumble and a little note that esoterically appeared on my phone asking me to buy more Pot Noodles.
David Blaine says David Blaine pushes the envelope of illusion into realms never before shown by other, lesser magicians. Also, the chicken and mushroom Pot Noodles. Not the beef ones. Or the sweet and sour ones. He also likes crisps. He’s certainly been making them disappear.
He’s in the room now. Like a weeping angel from Doctor Who but without so much to say for himself. He’s just sort of a pair of trainers topped with confusion that never quite got over a growth spurt. And he just giggled because I wrote ‘spurt’.
David Blaine is stealing all my batteries.
Posted by Alan at Monday, October 08, 2012
Email ThisBlogThis!Share to TwitterShare to FacebookShare to Pinterest