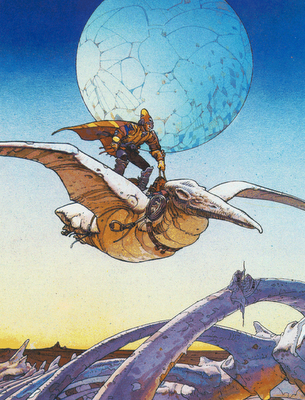 I ate my lunch on that bridge on the edge of Tolly Maw where passers-by, do. I didn’t care about the rain, it seemed fitting, for today was a sad day. Today I found out that on Saturday Jean Giraud died. Giraud more popularly known as Moebius is one of the greatest graphic artists that ever lived, and now died. I wish I owned more of his stuff, I’m sure I will but for now I can only think about the work that won’t be produced. I never met the man, I wish I had. French comics have a freedom and a wonder you don’t find in our own. Moebius drew like no other and this weekend too a very good friend (and the world’s authority on comics) showed me how nowadays the changes towards computerised photo-tracing in comic art. The two facts this morning made me very sad. It’s a slump I’ve not managed to free myself from yet, and as I say I never met the man still less knew him. So I went to the bridge in the hope he would pass by, but he never did.
Giraud’s art was both intricate and had a wonderful sense for space. The line-work exquisite. He worked on such films as Alien and the Fifth Element. Whilst his Jerry Cornelius And The Airtight Garage was later changed to ‘Lewis Carnelian’ through a misunderstanding over Moorcock’s appreciation of the wo rk the very idea of two such greats overlapping makes the sun that much brighter.
I already miss the man I never knew so I’ll go back to the bridge when the sprouts are asleep and I’ll wait, and if he does not pass by then still I’ll raise a glass to him and just thank him for what he left behind, the wonder and the realisation of it all. I need to draw more, and whilst I will never, ever be his equal that’s perfectly fine, I’ll be a better me because of it.
Here’s to you Moebius, and thank you.
Posted by Alan at Monday, March 12, 2012
Email ThisBlogThis!Share to TwitterShare to FacebookShare to Pinterest