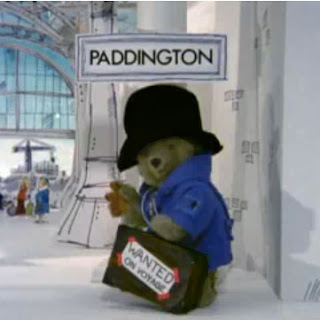 This is not the bear you are looking for...


Paddington Bear has completed his redemption with the media with his success in the Animation Awards last night, being named Britain’s Most Popular ahead of such animated stalwarts as Mr. Benn and Daniel Craig. Paddington a bear that came to this country from darkest Peru in the 50s surprised many when interviewed by Dave Dee by the thick accent and almost total absence of English , voiced as he was for many years by Michael Horden, little of either of which remains today. The 60s saw his downfall, outed by the press for the wild drink and marmalade parties, his indictment in America over drugs after Muffin (who acted as his mule) turned state’s on him.
He became at the time something of an icon featuring on the famous Doors best-of cover wearing only a string of beads, also a pariah due to his visit to the-then Vietnam war and his subsequent adoption by the Viet Minh as a mascot. To this day there are veterans who twitch at the sound of small rubber boots, that possess that look in the eyes described as ‘an especially hard stare’.
The 70s saw a bear on harder times. Jim was dead, Janis was dead, Jimmi was dead, and Paddington took an ill-advised role in the hard-core Fritz The Cat. Work went completely after that until long-term fan Quentin Tarantino cast the bear in Pulp Fiction. Only briefly on screen as Zed’s ‘bear in a box’ the role was enough to make Paddington cool again. Even the more recent Bears On A Plane (where through CGI one bear was enough to put all other bear-actors out of work) did not dent ‘the Padds’, recognised yesterday before his peers.

Paddington Bear is currently appearing in the Swan Theatre in the RSC's production of A Winter’s Tale, where Antigonus exiting, is pursued by him.
Posted by Alan at Friday, March 16, 2012
Email ThisBlogThis!Share to TwitterShare to FacebookShare to Pinterest