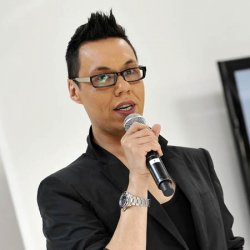 Through a strict regime of learning very bad dialogue and winding down all good sense it seems that in the next instalment of the dreary Star Wars franchise a last Jedi is born on Earth. Star Wars ended with the Battlestar reaching earth (where sets were somewhat cheaper) setting itself aside from proper episodic science-fiction by consistently not being set in a quarry. This bold move has led to the story advancing to the point where the next chosen one is no longer in a galaxy very away, nor a long time ago, but within easy working distance of London.
It’s clearly time for an update of the saga. In this the first part (provisionally titled ‘Star Wars, How To Kick Arse Naked’) a young Gok Wan Kenobi will be fabulous, with a light saber. Through his advanced training, high street fashion, and feeling good about himself Gok Wan Kenobi will fight very briefly but successfully by turning his light saber off when another tries to parry it and then on again in the same movement thus cutting the latest Sith Lord in two, neatly. Whilst saying ‘literally’ a lot, when probably meaning ‘figuratively’.
The film will also focus on the use of the Force in Britain, local parlance rendering it into the more street-savvy the Bill. No one will really care what goes on other than to wonder why using the Bill is so situational, waiting for more light-sabre action on the streets of Sun Hill where Gok Wan Kenobi will help Tony Stamp rescue a young street-walker from her abusive former boyfriend, and some sort of fire. Robin Williams as the latest Sith Lord will be hilariously camp, again, annoyingly, eliciting for the first time ever an actual cheer when the dark side is defeated. Due to confusion over the name Robin Williams will then rejoin Take That, who shadowy and indistinct will stand in the background at the end looking earnest.
Already the second part of the trilogy is being auditioned, Death Stars In Their Eyes.

Posted by Alan at Sunday, March 18, 2012
Email ThisBlogThis!Share to TwitterShare to FacebookShare to Pinterest