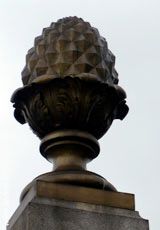 If you look you’ll see them a lot – pineapples in London. On roofs, on arches, used as stoppers on gates and railings once you begin to look you’ll notice them nearly everywhere you go in the capital.
Pineapples arrived in London in the 17C and were of course then highly exotic. A luxury that for some time to come could cost thousands, often auctioned. Even when glassmaking proved sufficient for real greenhouses the cost of such glass and the room for such an undertaking kept them as a rare and exotic luxury.
The pineapple then became a symbol, and one of welcome.  I like that. That architecture had such meaning, these not-hidden or secret symbols that remain today and almost entirely unseen. But next time you walk the streets of London keep your eye out. Trust me, they’re everywhere.
Just don’t assume that everyone knows it or adheres to it. Especially dance studios.
In the 1950s the pineapples were a meeting point for the merrimen. Boisterous, young (and doubtless spoilt) gadflys who would mug passers-by, stealing nothing but forcing upon people out after dark crude clown make-up if they possessed a sour face or a winkled look.
The habit died out right about the time working class boys, less given to taking such humiliation, were becoming teds. You have to suppose that a sack (however well wielded) was no match for a bicycle chain.
Posted by Alan at Friday, March 30, 2012
Email ThisBlogThis!Share to TwitterShare to FacebookShare to Pinterest