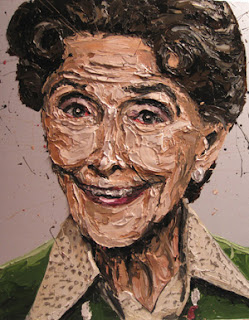 Marilyn Monroe’s back at the door again. She’s not aged well, but then who does at 86? I was never particularly interested in Marilyn unlike some, she acted and she had hips and thighs and good curves such as you don’t see so much of on screen big or small nowadays. She was always someone that had already died to me and given her overdose has led to a wet sack of conspiracy theories ever since it’s all in the same part of my head where lurk people that don’t believe on the moon landings. Marilyn was before my generation, who for such things had Caroline Munro, Raquel Welch (and according to my mate Maurice, Dennis Waterman) already with a long list of films to discover. Proper women, with curves, important when you’re of a certain age.
Well, Marilyn doesn’t have curves now. After her pretend-death she reinvented herself as a much better actress. Most popularly known for playing Dot Cotton in EastEnders I think she turned in a fantastic Nannie Slagg in the Beebs version of Gormenghast. She turned her back on the pouty-glamour and rose within the ranks of the Women’s Institute, especially here in Tolly Maw where the WI has since the early 70s adopted the more hands-on approach and name of the Dead Starlet’s Cake and Thunder Vigilante Model Railway Society. It’s a bit of a mouthful and is one of the few organisations I’ve encountered where it’s less faff to say the whole lot than use an acronym. And she keeps on coming round selling raffle tickets (top prize ‘Michael Flatley Sings Starlight Express’ which she is insistent on not being a recording). It’s possible since after Riverdance the terrifying soloist has only gotten work tamping down mastic-asphalt, he’s cheaper than a big roller apparently.
You can hear Marilyn coming. She has these rats in a birdcage she feeds only on brandy-soaked millet worms (the sort nylon tents are spun from), and they fight and swear and are always drunk because of it. She wears clogs made of shoehorns, hobnailed. She gets about in a pram pulled by monkeys, and not nice monkeys, but old monkeys that look up people’s skirts. They set upon travellers with Velcro and a kilt so they can look up it at need. I don’t know why and I don’t ask because you can tell these aren’t nice monkeys, nice monkeys have ruffs.
So I’ll have to buy some raffle tickets because they’ve just flopped onto the mat. She calls out that I can sell them to friends, for a good cause, but we all know that means you have to cough for them yourself.
It’s for a good cause at least. It’s so you don’t go on the list held by the Dead Starlet’s Cake and Thunder Vigilante Cadre Vigilante Model Railway Society. The list of wrong-uns. The list of those that need watching. By monkeys, through the window, when you’re having a nice read of a morning over a good poo. Where they scratch on the window with their one, long finger, licking the glass, whispering the words of Dennis Potter. In monkey.
So I’ll put you all down for three apiece?
Posted by Alan at Wednesday, March 07, 2012
Email ThisBlogThis!Share to TwitterShare to FacebookShare to Pinterest