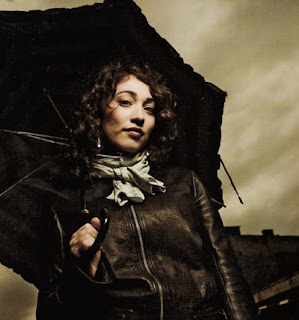 As ever I seek to keep you updated with news from the all-important twenty-third James Bond flick. The villainous ‘science’ I reported on earlier has been confirmed albeit not precisely as a villain in and of itself, but a tool in the hands of an old enemy revived. For once again (and quite right in a re-boot) prune-faced action-foot James Bond is faced with the efficiency of Spektor.
Albeit Regina Spektor.
The SPecial Executive (for) Killing sTuff, Old (people), (and) Rolos whilst still an organisation dedicated to world domination and unlikely killings (also old people, and toffee-filled sweets manufactured by Rowntrees) has been given a face lift set to take it away from association with its parody in the Austin Powers franchise. Whilst in that series of films (starring Wayne from Saturday Night Live) secret agent Shrek enjoyed box-office gold with a donkey, and Prince Charming, and probably some witches it is not thought that ninety minutes of dialogue consisting entirely of the word ‘Behave’ would fly with audiences - unless Roger Moore were to reprise the role.
Regina, actually as it turns out born in Russia, having heard the rumours has reportedly sent Tori Amos and Joan Osborne round to shut me up. There’s a knock at my door.
Wait, what?
Posted by Alan at Tuesday, January 17, 2012
Email ThisBlogThis!Share to TwitterShare to FacebookShare to Pinterest