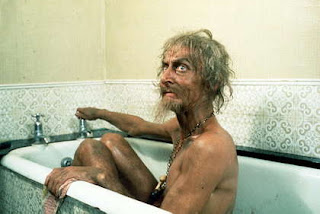 The Boffin a fellow of infinite beard
Though trimmed to the chin by a wren
Resembled a wizard who with glass in hand
Might have troubled a malt now and then
A malt in that glass that could not be seen
A glass that the Boffin then raised
To show just exactly how much remained
Of the malt and his eyes (which were glazed)
Unlike the window which without glass
(The glass that it never could find)
For the window had a cane and a Labrador dog
No curtains, but a very fine blind
The Boffin rocked back on his best pointed heels
And his eyebrows he gave a good twirl
As he heard their adventures related in rhyme
And of Young Grouter’s good need for a girl
‘Easily done’, the Boffin declared
‘For a girl you have come to the right man
A man with a beard that keeps warm a brain
Already possessed of a plan’
‘A plan already indulging in progress
A progress already in demand’
That demand of a chap with a finely turned beard
Might still yet attend to by hand
A dolly, a device, of all a chap might find nice
‘Home brew and pipe smoke, a garter
A spitfire, a Kylie, and good shepherd’s pie
A drinker, a chum, and a farter’
‘In fact’, said the Boffin whose studies had shown
His investigations, his queries and tests
That the woman just right for a chap such as he
Was ‘a chap, but one with good breasts’
‘We’d admire them both, he and I, you and me’
Said the Boffin not wanting to seem silly
‘You’d fit the bill, to a tea, to a scone
Just as soon as you’ve offed the old willy’
Grouter protested, the angel concurred
Bright red and burning their ears
To be spoken of concerning a wild night in
With scissors, and scalpels, and shears
They were seeking a girl, their geas, their quest
(A quest ever proving more tricky)
For good honest love, true-hearted and pure
Also dirty, and nasty, and sticky
‘My dear boy’, said the Boffin who fetched up his coat
His scarf made of scarves and a hat
‘If you wish for a girl made entirely of girl
Then the girl that you want will be that’
And he had it in mind then to take them both out
To the house of the Vixen, who sociable
Was apt to cure young men of romantic ways
For a fee that was generally negotiable.
Posted by Alan at Saturday, January 21, 2012
Email ThisBlogThis!Share to TwitterShare to FacebookShare to Pinterest