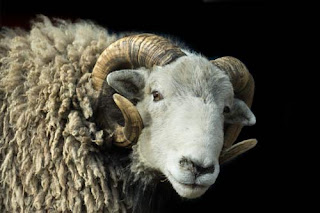 ‘It don’t happen in nature.’
Would say the ignorant or the absurd. Quite aside from 'does not', then Great Cope only knows the mindset and really I’m not doing anything about it here. Things are only positive in Slide23 but it’s Spring and the lambs are, quite literally, staggering about wondering why they were born when it’s still not warm. The answer to this last is that it’s Cumbria and whilst we had a summer once between June 12th and 21st this was in 2008. It’ll roll around again. Any day now.
But lambs.
Lambs. There are lambs and where there are lambs there are ewes but not for a few fields here for backing on to Slide Towers there are but rams, and three of them. Rams that for most of the year have only one another for company. Rams that as the weeks go by develop testicles like grapefruit in already-tearing supermarket bags. And let me tell you friend, it does happen in nature.
Nothing quite like the sight of a three-way ram bangalong to tell you you’re in the country. Certainly Cumbria. They’re all in the same field so it’s not like they have to be coy or carry little wooly hankies in one pocket or the next. They’re rams and if ewes aren’t to be found then fuck it, ewe’ll do. Aho, ho!
I’ve mentioned this in conversation and been told that the rams aren’t procreating, they’re fighting for dominance. If so they’re fighting with their cocks. And it’s a field, not Barney Denial’s hate-filled terror-fantasy of prison. You might want to watch them when released on the flock too and count just how many bunches of flowers they bother with – and flowers bloody grow there. These are rams, they do not arrive with artfully selected chocolates and an Enigma CD.
It don’t happen in nature?
Just jump over this fence son...
Posted by Alan at Monday, March 14, 2011
Email ThisBlogThis!Share to TwitterShare to FacebookShare to Pinterest