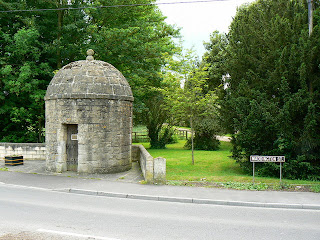 This the Shrewton Blind House can still be seen in the village not far from Stonehenge and one of the few upon the plain. Serving for decades as a lock-up for prisoners it was primarily used by the sheriff’s constable taking prisoners to the Devizes assizes, to overnight them whilst the constable would nip across to the Wheel for the evening. First built in 1700 it is all that remains of a chain of little gaols just like it stretching from Bristol to London. Erected to be a day’s good journey apart they were raised for one prisoner, the (then) Sir Alistair Uttinfrer, long forgotten villain and adventurer – accused of sedition and treason and caught at last when fighting for Sweden in the Great North War.
Uttinfrer was a man both feared and feted, a mathematician and natural philosopher, soldier of fortune (and for some reason, milliner). Once a popular rogue with a reputation, the Byron, the Crowley even the Keith Richards of his day his fall came with the publication of a volume declared heretical and whose name, let alone a single copy, has failed to survive.
There is little doubt that Uttinfrer was a spy for the crown, albeit a very bad one if even today he is so described! As already said then, an adventurer and one who had been caught and escaped three times in apparently impossible circumstances. Inevitably this was ascribed to magic, and to the extent that brought to Bristol the Blind Houses were built simply to hold him. Shackled, locked and screw-eyed (a system whereby discs similar to bottle caps were clamped into the forced-shut eyes) he was actually feted still on his journey until and here in this surviving Blind House, he escaped. At least it is known that he never reached London, and the last record found of his being anywhere is here.
Of course there is a great and ripely told tale that within the Blind House he made a deal with the devil, but it’s hard to imagine if such was indeed the case how such a thing would not have come to pass far earlier for the now forgotten Sir Aleistair Uttinfrer.
Posted by Alan at Thursday, March 24, 2011
Email ThisBlogThis!Share to TwitterShare to FacebookShare to Pinterest