A bomb shelter near you! 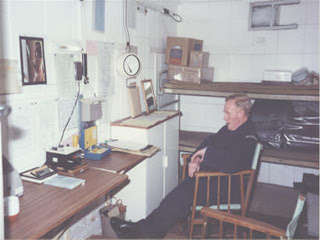 As recently as 1995 the Royal Observer Corps supported a small army of civilian volunteers that uniformed in the RAF manner gave up their weekends and evenings to sit underground in their little ROC posts all over the country, and wait in case Atomic and then Nuclear weapons rained down. There then they would record direction, intensity and as much information as they could, pass it over and presumably hope that all that pesky fallout was gone before the tinned beans ran out. These posts can still be found and a fantastic list and much better photographs can be seen on the 28Days website listed below. This their Cold War role, teams of two or three in little shelters underground rather sums up what anyone born after 1970 probably never endured. Because in the 80s I remember distinctly being aware that Nuclear War was not something in science fiction, but a distinct and very real possibility.
It is possibly hard for the blessedly younger amongst you to imagine how different things were. There are war and threats, but all so very distant and if there is the fear of terrorism then sorry, we had that too only in our case the IRA did actually plant and trigger bombs. We had an army in Germany where it had been ever since the Second World War and there was to us a very real chance of another war, this with the USSR and one that would see us glowing in the dark due to being America’s ‘unsinkable aircraft carrier’.
And because of this then almost certainly within a few miles of wherever you are right now, the ROC gave up their weekends to sit in a damp shelter and... wait.
So click below and see what state your local shelter is in. Where people with flasks would have carefully noted how bright was the flash over your house. Bless ‘em.
http://www.28dayslater.co.uk/forums/forumdisplay.php?f=50
Posted by Alan at Monday, March 28, 2011
Email ThisBlogThis!Share to TwitterShare to FacebookShare to Pinterest