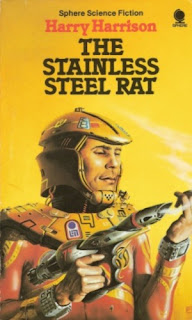 Oh, but who wasn’t delighted when Slippery Jim DiGriz was in town?
The character is older than I like a good uncle should be, and in one’s youthful years was something other than his likewise star-hopping peers. Beginning in the eponymous first novel and in jumps and starts through the similarly excellent Revenge, Saves the World and then For President Jim also had the good grace to not just be a friend to our parent's generation of bearded sci-fi buffoons, but to us too. He did it because though the novels were already dusty when we came upon them – they weren’t finished, and indeed there were more. For as we were young then so too became Jim, as his early years came out. Came out new, not before seen – and just as we were buying books for ourselves. And back then Jim was our favourite uncle. All of ours. We’d all read his adventures and now read his latest and it was something we shared. Because everyone liked The Stainless Steel Rat, right? Like Led Zeppelin, and rum & coke.
But and perhaps rightly he’s moved on to others now. Just as I’m well aware that Jethro Tull have produced albums after Broadsword & The Beast so too have there been Stainless Steel Rat books after Get’s Drafted. I tried one, it wasn’t the same – but perhaps that’s the point. He was there for me when I needed him, that witty, clever thief that never kills anyone and overthrows the corrupt and the mean without any hint of po-faced sermonising. And he still is, and I think I want to reread them again – so I will.
So why not join me?
Posted by Alan at Sunday, March 13, 2011
Email ThisBlogThis!Share to TwitterShare to FacebookShare to Pinterest