Betty Blue (the girl from fifteen years ago) 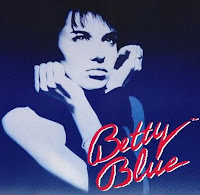 I’ve read the book and I’ve seen the film, but only the once. It was the favourite of a friend of mine, more than a friend of course – and someone I think about often. She loved this film and unbeknown to me because it might as well have been about her.We were together for three years and for reasons I can’t really work out other than being young, stupid and selfish I split up with her. And when I saw her ever thereafter there was nothing in the eyes. You might know what I mean. Love is what you see reflected back and it wasn’t there, of course and why should it? Yet when mugged at Glastonbury she came to find me. And there was the odd stilted phone call when there were a lot of silences, but not awkward ones. Don’t get me wrong, she moved on and had other relationships but there was still that thing between us, like fingertips but only in the dark. And we both had our problems only hers were worse than mine because fifteen years ago and nigh on today – she wrapped that big warm blanket about her shoulders and left us. And I still think all told that this is the shittiest thing I’ve done. And there’s been much worse done, by others – probably by you, but I still carry the guilt. I could have been there.
And still been here now, with my family and my girls. Because fifteen years ago Q also lost her then boyfriend in a traffic accident, and we’ve been together for fourteen. You can see how things would have been, and still here we would be. And I don’t think I could have changed what happened, nor would I because I understand it, absolutely.
It’s terribly sad but I do not regret the time we did not have, I celebrate the moments that we did. So I love this story and I’ve only seen it once, and never again.
Back to the nonsense tomorrow.
Posted by Alan at Tuesday, March 29, 2011
Email ThisBlogThis!Share to TwitterShare to FacebookShare to Pinterest