Rob Nott - Have You Seen This Man? 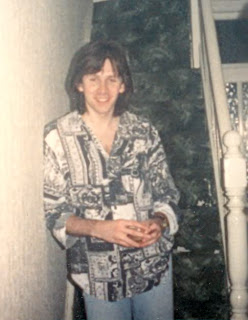 The second of the two proper musicians I know, or knew – and since music is the glue that holds the world together it seems best to see to the makers of such first. Rob is a very old friend. Indeed I’ve known him since I was thirteen when I answered the now renowned Waiting For Godot advert in the pages of White Dwarf. Rob a German from Cornwall that lived in Norway narrowly avoided popular success by jumping ship from then swiftly-thereafter pop sensation Aha in which he played keyboards. Happier by far in a touring line up of King Crimson we lost contact with one another. Only years later did I find out that having dodged the German version of National Service for so long he had been caught and given a Kevlar hat in time for the Gulf War where he flew the Gullfire over Leningrad. Given that I speak better German than Rob, this was quite a feat.
We lost contact again until one Sunday there Rob was on the front page of the News Of The World, as seen by me from the garage forecourt of a Moto services. Caught as the mysterious companion of Kate Moss he has ever since denied any knowledge of such an affair.
Rob lives rather reclusively now in Bournemouth where he has more comics than you, and has a more ordinary life under witness protection doing something with sums for an Assurance company.
Posted by Alan at Friday, March 04, 2011
Email ThisBlogThis!Share to TwitterShare to FacebookShare to Pinterest