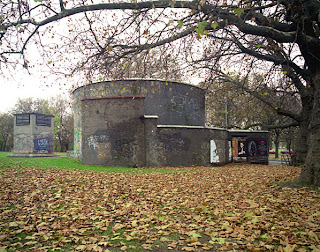 I’d often walk past this place and as at the time I was fascinated by what lay underfoot I was later rewarded when I discovered that yes, this is indeed the entrance to a bunker. To be more exact one of the Deep Level Shelters built along the Northern Line (others include Belsize Park, Stockwell, Goodge Street and all the merry Clapham sisters indeed) many of which are obvious in that when one knows what to look for. The stations themselves and to my mind most obviously Belsize Park look like pillboxes, with rounded ends and vent chimneys. There’s nothing especially sinister in this and more recently they’ve been opened and explored in many cases, used for filming and it’s not like they’re military citadels (many of which having been built originally for the Blitz were found wanting in the atomic age that followed) – five were indeed opened and used during the war by the public. Eisenhower used Goodge Street (it’s marked still as the Eisenhower Centre, go and look), and Clapham South as pictured here and the focus of this post was where the arrivals on the Windrush were placed, the shelter becoming here a hostel.
There is a lot of this sort of thing in London. Vents might be the Underground but there’re funny little blockhouses and tucked away places in layers under the feet of you lot still there. Indeed and if this strikes anything at all then get yourself to SubBrit now.
There’s not much there about the cannibal tube passengers, the tunnelling cults or the Deep Ones of Belgravia, but the slips are like that and this is all a lot more astonishing than rubbery old Cthulhu anyway.
http://www.subbrit.org.uk/
Posted by Alan at Monday, March 21, 2011
Email ThisBlogThis!Share to TwitterShare to FacebookShare to Pinterest