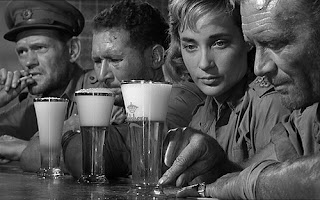 I love films older than I. Way back when before anything one-wants-now, before even video, then to see a particular film you had to wait for it to come around again. Goldfinger was an event for my Dad who would kick us all off to bed so he could watch in peace and for me it was Saturday afternoons where slowly and over time the grand old films would be unrolled. I liked them black and white. I liked them made by Ealing. I was delighted if Terry Thomas was in anything whatsoever. I’d wait to see if dams would bust, if killers would do so with ladies but I never managed until relatively recently to see if it was actually ice cold, and in Alex.
This is not entirely correct. I’ve seen the film in bits and never for years, and years – all together. Whenever it actually seemed to come round again as a boy there’d be some bloody awful horticultural show to go to, or a jumble sale to support, or an allotment to be turned over. Once when I was promised absolutely (due to the fanfare of the film being on in the following week) that I would, without fail, be allowed to watch it my Grandfather had to go into hospital. So rather than Ice Cold In Alex I instead spent a wet afternoon on Wimbledon Common. There are I should say here, no Wombles.
Years later and with my own tele and little changed. Somehow I’d never see the beginning. Or someone would come round when Katy is being forced backwards up a sand dune. When the Afrika Korps went into pursuit a real war would break out, or something.
Which is a shame because Ice Cold In Alex is a cracking film. A war film where the heroes are horribly flawed, there’s still a silly amount of flapping and twitching upper lips, and where the central cast discard anything resembling a gun with hasty abandon. If you’ve seen the film there’s no point in me describing it to you, if you haven’t then why should I spoil it?
I did in the end get to see it and then because sick of my rants on the subject my beloved better-half took herself and the kids out for the afternoon, I unhooked the phone and swore not to answer the door. And after thirty odd years I found out why there were in the desert at all, which was nice.
Yes I could have watched it on video, or DVD, or whatever there is now. But that would have robbed it of the point. And the sheer, wide-eyed and fixed smile delight of when, finally, I was there for the whole journey. And the scene above? At the end? I’ve been there. I’ve worked where on a hot day I’ve been out for twenty-four hours or longer at a stretch and afterwards I and my fellows would sit at the bar and just look at our pints. So cold as to take the skin from our fingertips. Ice Cold, albeit then in Yateley.
Posted by Alan at Friday, March 04, 2011
Email ThisBlogThis!Share to TwitterShare to FacebookShare to Pinterest