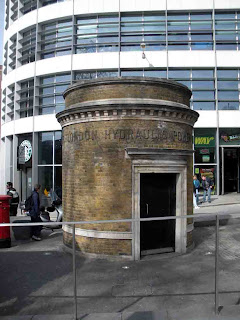 Hardly a secret but fascinating none the less, the Tower Subway where here the newer entrance still stands in Tower Hill to the tunnel that stretches beneath the Thames to where once it emerged in Tooley Street. Briefly possessed of an ‘omnibus’ at its opening even the Vine Street entrance did not long last and the then new entrance in Tower Hill in 1871did not provide for the life of the subway beyond the opening of Tower Bridge twenty-three years later. The photo shows the yet more recent entrance dating only from the 1920s whereas if going by that across the river (lost more recently in the 90s) the originals were far less pleasing affairs, that one vanished last little more than a rather nasty and rusty shack by the end.
Damaged in the Blitz the subway was little touched at all in the last century other than as a conduit first for water and then more recently fibre optic cables. Persistent failure lead after some investigation into evidence of a surviving rat-boy, famously of Limehouse but as previous to this suggested to have been driven underground by the increasing regeneration of their former habitat. Whilst the evidence is at best shaky, it was judged sufficient for a preservation order to have been slapped on the subway which now remains locked and unused because of it.
Whilst less a part of pop-culture in the 21st Century, still Viz produced a series of comic skits based about the Limehouse Rat Boy, mostly concerned it has to be said with defecation.
Posted by Alan at Thursday, March 03, 2011
Email ThisBlogThis!Share to TwitterShare to FacebookShare to Pinterest