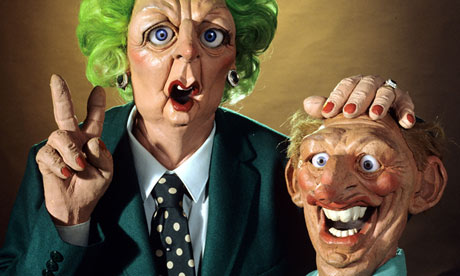 It comes as something that on a blog you can’t say what you’ve been doing. Which I shan’t, so there. You’ll have to speculate. Yeah, there you go*.
But I’ve been nudged and today outright told that if current events now don’t see me commenting then nothing will. Previously I had to take down a selection of articles. The first the latest in the ever popular history-in-800 words concerning the rise and fall of Goths across the centuries. One regarding Robert Smith. And the other about the Clash which whilst entirely flattering is still now a hate crime. Frankly I’m stuffed since not being able to take the piss out of Goths leaves me with a big, gaping hole in my conversation. Ugly bastard buildings.
The matter at hand of course is that descendant of straw-roofing artisans, the now late Baroness Thatcher. And who doesn’t miss Danger Mouse? Now I’m sure that many would suspect that I’d be here to rant and rail and throw stale buns at her memory. I’m not because as I’ve witnessed across the net her legacy lives on, indeed benefits us all today. Because Thatcher has reminded us once again of proper politics. Once more people are on one side or the other. They get heated, they loath those who say or think otherwise. The lines are drawn. Everyone is us, and all of them are crypto-wankers or reactionary-gobshites. And that’s swearing that is.
For too long we’ve all sort of muddied our way through a series of Tony Blairs. First there was Tony Blair. Now there’s Tony Cameron, put in power by a lot of people who voted for Tony Clegg. The last is hilarious. It really is. A lot of people who would never, ever vote Tory did do. And they always will have. Ha, ha, ha. No skin off my custard you understand. I just want you to vote. Always. Just don’t bang on about it afterwards.
So we’ve been swimming in the non-Newtonian fluid of many Tonys all chasing the same sort of votes and all looking quite alike and really with very few exceptions sort of muddling along somewhere in the middle like Goths at a black lace theme night at the roller disco. Shit, did it again.  Here we were until yesterday with the Tonys only told apart by Tony Cameron looking a bit pissed off, Tony Clegg looking resigned and weary, and Tony Milliband being the restaurant at the end of the universe. But not now. Now once again there are lines.
Yes, for the next few days at least everyone is either a boil-in-the-bag fascist barely a short hop from bovver boots and a hairdo to strike matches off, or an unshaven commie who never did a day’s work in their life with a silly beard, that has trouble filling up their petrol tank for all the milk bottles they’re topping up first. The one demands we remember the 70s, the other the 80s. I remember both. The first had Action Man in it and the second Kajagoogoo. If you don’t remember them or Flock of Seagulls then you don’t really have an opinion on the matter anyway. They were both rubbish bands. Unlike those in the 70s which hindsight has pruned of all the crap in the charts then too to leave only Led Zeppelin at number one every week even though they never released singles.
So delight in it. Revel in your awakening. The lines are drawn, politics is back.
And the word ‘Falklands’, ‘Miners’, and 80s chart music are the new Godwyn for the laws on internet debate. The last one I added. Really it was bloody awful. Unlike in the 70s when Jethro Tull were on Top Of The Pops every week and Punk and Disco were never around at the same time at all.
Especially roller disco. With Goths in the middle like a pack of Tonys.

*Also, gout.
Posted by Alan at Tuesday, April 09, 2013
Email ThisBlogThis!Share to TwitterShare to FacebookShare to Pinterest