Disney's Robin Hood - Where Are They Now?

Disney’s smash-hit Robin Hood hit the screens in 1973 in an era otherwise dominated by Led Zeppelin and seaside boarding houses that expected guests to go away between breakfast and teatime. Reviving the story of a little known English folk hero, the 70s animated feature daringly used mostly American actors to portray the roles, a feat not attempted since. Based on the nigh-forgotten tale of an outlaw against the Plantagenet monarchy, Robin robbing from the rich to give to the poor is ever ready to fight for justice. Robin faces off against the evil Prince John, who on the orders of his brother King Richard has to raise a monstrous amount to pay his ransom in order that he can return to England for exactly four minutes (whereupon the rebels all fall to one knee and realise they don’t personally speak a great deal of Norman French). Later adaptations of the-then much more famous tale attempted to put a swing on events such as by casting paddle-footed and giant-handed marsh wiggle Uma Thurman as someone or other, but no one watched that version (filmed at Peckforton Castle) competing as it was for the latest instalment of Waterworld, set in a wood,
But what happened to the stars of the Disney version? Never having heard of Errol Flynn and plagued by a clause in the Magna Carta (that made it compulsory to have Sean Connery in it somewhere) what became of the stars in later years? 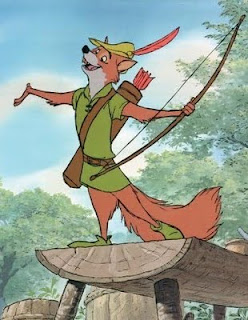 Despite an appearance in the Plague Dogs, Robin could not find work having been typecast as a rebel, later adaptations of the tale put aside the fact that Robin Hood was a fox. Not until The Animals of Farthing Wood did Robin attract a starring role again. Robin’s portrayal shocked old fans due to his blatant nudity from start to finish. Work in computer games saw him provide a voice for Sonic The Hedgehog but not until 2009s adaptation of Roald Dahl’s classic Fantastic Mr. Fox did Robin’s early promise show substance. 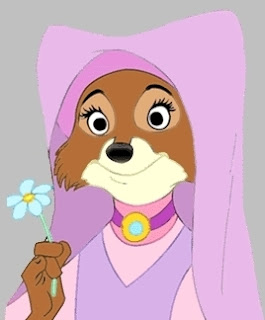 Robin’s love interest Marion fell further, appearing quickly after her first role as the girlfriend in Fritz The Cat. Modelling work came through Sylvanian Families but she rapidly fell into the infamous Anime market where she remains to this day. 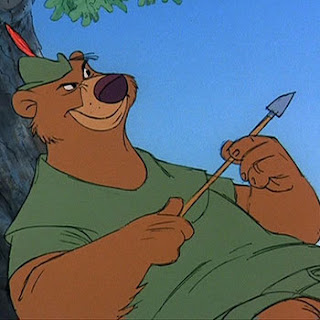 A Polish war hero, Little John was the elder statesmen of the ’73 film. Well known in the States as a stand-up, he returned to his vaudeville roots as wise-cracking Fozzi in the Muppet Show. It all came to an end when Little John was convicted for stealing picnic baskets and he is perhaps best known nowadays for the antics of his son, Eton-educated spider-muncher Bear Grylls. 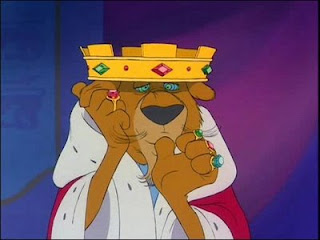 Lastly and Prince John, the thumb-sucking buffoon (later parodied by Alan Rickman shouting a lot) returned to theatre. Forging a productive career in documentary, and a close associate of Richard Attenborough, his story is now being trotted out in Broadway and the West End where at last he is a King, not a Prince. A thinly veiled vehicle put together to allow Prince John to play Othello he delights tourists daily, with puppets.
Posted by Alan at Tuesday, May 01, 2012
Email ThisBlogThis!Share to TwitterShare to FacebookShare to Pinterest