Crossing The Congo By Motorboat 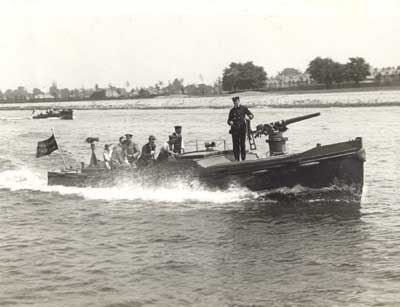 The inland Land Tanganyika extends for more than four hundred miles in Africa where during the Great War it was dominated by the German Navy, mostly in the shape of the Graf Von Gotzen. There was no way the British could putt-putt-putt all the way up the river from the ocean as the said Von Gotzen was sat there all big and armed and probably captained by Gert Frobe beat-boxing the tuba like he did in Those Magnificent Men In Their Flying Machines. So what would you do?
Well Lt. Commander Geoffrey Spicer-Simson considered the only feasible plan was to launch a surprise attack on Gert Frobe from landward, and by water. Taking a pair of motor gunboats the Mimi and the Toutou (French for miaow and woof-woof) – originally intended for the Greek Air Force, of course, because it has to be that odd – he shipped them to Cape Town. But that wasn’t especially convenient for Lake Tanganyika. So the boats were put on a train to the Belgian Congo, which was the easy bit. Sort of since they had to make the railway go a bit further, a hundred miles further. So with ships, oxen and hundreds of locals (oh, and two steam engines) they built over a hundred bridges and where mere bridges would do it and invented whole new crane and winch systems when they would not Which got them within 500 miles of the Lake. Whereupon it was mountainous jungle. So they humped the two gunboats the rest of the way. Or they humped the gunboats and then built a railway. Either way...
It’s a lovely sort of madness and it should be no surprise that, yes, Gert Frobe was indeed surprised. The expedition is that which inspired The African Queen, though that story was only mildly difficult compared to the real thing.
What sort of madman engaged on this expedition? Who was Spicer-Simson? As it happens the Royal Navy’s oldest Lt. Commander on account of any time he was ever given command of a ship he would collide it with another one. It’s generally bad for the promotion board when you do that with the odd destroyer or two. But he knew the land, or more than anyone else and though it was risky putting him in charge of two little gunboats (give that with that many his record showed he’d ram one with the other) the task was his. Spicer-Simson smoked only monogrammed cigarettes, wore a khaki kilt, and insisted on an Admiral’s colour being raised outside his tent each day. It’s recorded nowhere but I’m pretty sure he would have gone to battle to loud gramophone music whilst reciting A. A. Milne through a speaking trumpet.
I suppose it takes that sort of personality to look at a map of Africa and decide that to outflank the enemy Navy it is best to surprise them by crossing the Congo. Spicer-Simson saw out the Great War as the Assistant Director of Naval Intelligence.
They had proper spies back then.
And I’m making none of this up.
Posted by Alan at Saturday, July 14, 2012
Email ThisBlogThis!Share to TwitterShare to FacebookShare to Pinterest