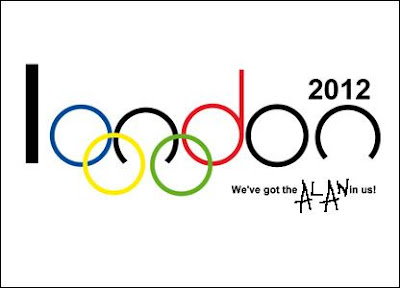 My coercion into participation in the nearly-here nearly-here Olympics has already been documented but after a dig down the back on the easy chair today I’ve just found out that a throwaway comment following it has had serious repercussions. Involved as I am I’ve been getting the round-robin tweets being used to develop ideas and solve any problems in less than 140 characters, and this morning I learned that we were exactly £3.12 short. I rather mockingly offered to cover that, only to be electronically jumped upon for an immediate payment! Not only a payment, but one made in cash. I found it, handed it over to the courier already suspiciously revving up outside the window and thought nothing of it other than to fire back an answer jokingly demanding that the whole event now had to be renamed in my honour.
So sorry, but welcome to the London 2012 Alan Games.
I should have thought that one through, eh?
I’ve never been too sure about the name ‘Alan’. If you type a bit too fast and loose it becomes ‘Aslan’, but even without the implication of lionhood it remains the sort of name that comes with a pipe and a cardigan proud of its leather buttons. Now Morgan I’ve got no problem with. Morgan is a straight up sort of name. It’s a name with a decent jaw and in Berlin makes one sound like a noir detective or one half of a fallen angel. Captain Morgan might never come home, but Major Morgan could put out a good tune. You’ll rarely find a character called Morgan being anything other than upright and competent. Alan is at best a mythological winged serpent in Tinguian folklore (but more famously one half ending with ‘Partridge’). It doesn’t even shorten well, being either the sort of lane where bad things happen or the sound you make when hitting your thumb with a hammer.
If you think that’s being too flippant then firstly – you’re on the wrong site, but more importantly it’s a name you’ll soon grow sick of. Because as I say, welcome to the London 2012 Alan Games. And to make sure it sticks it’s being retro-fitted to myth and history, to the original Alan Games held in honour of the gods at Mount Alan. No longer will there be Olympians, but a series of dedicated sports women and men who will hereafter be Alans. The plural, not the possessive. The sister ship to the ill-fated Titanic will have been the RMS Alan. The 1950s do-wop band will always have been The Alans. Maplin's Holiday Camp will boast of its Alan-size swimming pool. You will go and see exhibitions at the Kensington (Alan).
Sadly for me this means I no longer actually own the name. And not wanting to pay for the privilege of using a moniker (or cheekily taking instead ‘Monica’) that I never really liked all that much anyway it’s been decided that I have to adopt whatever I’m more commonly called instead. Which is ‘Daddy’, which is a bit creepy on thinking about it. It’s worse for others than I, and to whom I hereby apologise. Especially to Canadian songstress and advocate of the term ironic, the now Is Morrisette.
So, I hope you’re all looking forward to formal opening of Alan?
Posted by Alan at Sunday, July 22, 2012
Email ThisBlogThis!Share to TwitterShare to FacebookShare to Pinterest