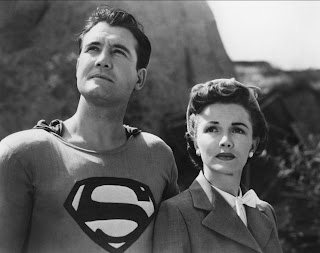 Look Betty, communists. Winged communists
The Justice League of America is to be outlawed we hear in the wake of everyone else but Superman being made superfluous due to Superman. Recently forced into the public eye through a documentary film almost certainly of the same name* (I’ve not seen it due to it not being all about cartoon animals that sometimes sing), the Justice League other than Superman has refused to save the world three times since Friday. No one noticed, because Superman did it. Offered the chance to be villains instead their refusal has met with an emergency session of the American Super Senate chaired by Superman that has voted unanimously by Superman to make it illegal to be a superhero unless Superman. When asked for comment Batman thought it was high time he was outlawed properly, and couldn’t be sure whether he was or not at any given time anyway.
“We were never needed really,” said Barry Allen, latterly The Flash. “We used to get the message that somebody in a mask was holding up a hospital and Superman would be there and back before I’d even reached the door. And it pissed me off, because reaching the door first is just about all I did anyway.”
Superman able to do anything everyone else could (apart from fire a bow, probably) better, faster and more invulnerably was unavailable for comment - though sources indicate he is engaged in important business saving the world with his new Superbow.
Being outlawed will pose a serious problem for the more earnest of former superheroes, JLA or not. Comic Con has already registered a protest over the new laws, citing the worrying lack of young women likely to be dressed as Power Girl in San Diego next month. “Without all the chicks dressed as Power Girl,” a spokesman said today. “We might have to move the whole event to the Corn Exchange, Guildford England. Apparently there are no such problems there, where we are assured many women will be cosplaying as ‘Sue Lawley’.”
Batman was seen rushing to punch the spokesman in the face, though Superman is reported as having already done it.


*It might be The Avengers. I don’t know, I haven’t seen it. I hope they made a better fist of it than Steed’s last outing.
Posted by Alan at Tuesday, July 03, 2012
Email ThisBlogThis!Share to TwitterShare to FacebookShare to Pinterest