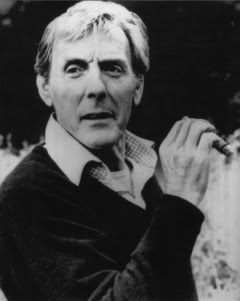 “For me, there is a daffodil in every dustbin.”
I’d gone out to the bridge yesterday in the hope of catching Eric as he went by. It happens quite a lot in Tolly Maw and those few moments of a last cheese sandwich with someone can be precious. But he didn’t go by, and it started to rain, so I ate the sandwich. A wet sandwich is enough of a symbol for me. I was delighted then to find this morning that rather than wandering off Eric Sykes was moving in. I didn’t ask about the whole being dead thing. It’s usually taken in the wrong way. He’s taken a house down on Sebastapol Terrace. I’m helping him move his baggage. There’s quite a lot.
Eric Sykes was one of the mysterious figures for me. I used to read radio scripts as a boy. It was after Hancock and The Goons but I knew so many of them despite not hearing a one. And Eric Sykes was strongly involved in both. Many things indeed. In the 1950s he shared an office with Milligan, Galton and Simpson. It’s hard to imagine what that must have been like as a heart for British comedy then and since. Later and my parents liked Terry & June – I liked Sykes. Would I like it now? Does it matter either way?
He was part of that Saturday afternoon delight, when there would be Those Magnificent Men In Their Flying Machines on. That’s still true to a greater degree. One of those films you make damn sure you never own so that when it comes up on tele it’s still a nice little event. Eric Sykes also played Charlie Griffin  (the undertaker-hit man from John Gardner’s Boysie Oakes series) in the film adaptation of The Liquidator. I don’t recall a lot about the film, but it’s telling that though I’d read most of the novels before seeing the film, Eric Sykes was ever Charlie Griffin on reading them later.
Eric Sykes was one of that stable of writers and performers that served as very young men in the war, and came out the other side dedicated to laughing at life (and perhaps because of it). I remember by great-uncle Charles was like that. As Lt. Back uncle Charles was captured and spent years in a Japanese POW camp and by the time I knew him he was this jolly, laughing, chap. Not because of his never spoken-of experiences, but perhaps despite them?
Eric’s efforts, his achievements, everything he was involved in is a very long list indeed. A worthy list, a list to be rightly proud of. We stop to have a cup of tea and he lights up a cigar.  He looks out the window. “There’s a price to pay everything,” he says. “But I find that price is very, very reasonable.”
Thank you Eric.
Posted by Alan at Thursday, July 05, 2012
Email ThisBlogThis!Share to TwitterShare to FacebookShare to Pinterest